Croesus Track is one of the finest surviving examples of a miners' track on the West Coast. Visitors can also experience what life was like for miners by staying in historic Croesus Top Hut, or by visiting the Garden Gully Hut.

Originally constructed in 1881, it is an old mining trail through the forest with many historic sites along the walk. The Croesus Track is one of the best surviving examples of a pack track in New Zealand.

In the early days of European settlement tracks known as ‘pack tracks’, ‘bridle paths’ or ‘bullock roads’ were built to open up the back blocks for mining, farming, tourism and other commerce.

Horses and bullocks were commonly used to access timber and mining sites, as well as transporting goods and equipment throughout the country. Many of the roads we use today started life as one of these early tracks.

Gold mining in the Grey Valley

When gold was found at Blackball Creek in 1864, miners formed a rough track up the creek, through what was known as ‘some of the roughest country ever travelled by man’ in the hopes of striking it rich.

Over 18 years from 1881 to 1899, this early track was slowly replaced by a pack track, now known as the Croesus track. Access was firstly improved to take miners to the Clarke Creek gold diggings, then through to the Blackball Creek forks, finally taking the track right through to miners’ gold claims in the Paparoa ranges. 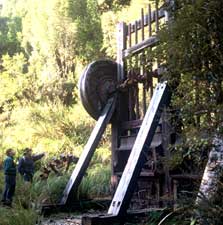 The track was skilfully built, using various traditional building techniques such as stonework and cuttings. It required ingenious engineering solutions to tackle problems created by the steep slopes and rugged country.

Today the track survives in much of its original condition thanks to the skilled craftsmanship of early pioneers and the stable nature of the terrain.

Today the 2 day trail is enjoyed by trampers and mountain bikers who traverse the rugged bush clad terrain to open tops, and pass relics such as the 19th century alluvial workings and the impressive quartz mining remains at the Garden Gully Battery site. They can admire the fine workmanship used to build the cuttings, embankments and stonework which are displayed along the track.

Visitors can also experience what life was like for miners by staying in historic Croesus Top Hut, or by visiting the historic Garden Gully Hut.

The hut sits amid beech/podocarp forest in a grassy clearing with a stream nearby. You are not permitted to stay in the hut but you can camp on the adjacent grassy flats. 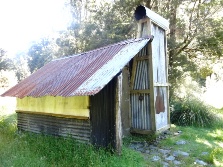 It contains bunks and has a large open fireplace with a corrugated iron chimney. It was fully restored in 2006, when the side walls were replaced by original treated calico.

The hut will be maintained to protect its historic fabric and minimise deterioration. A conservation plan has been prepared (Les Wright, June 1998) to guide its management. A hardcopy of this plan is available at the Greymouth-Manwheranui DOC Area Office.

Learn more about the historic significance of the Croesus Track - one of the best surviving examples of a pack track in New Zealand.