As technology evolved, one thing stayed the same. Learn about the humble stalwart that helped miners turn water into gold, and today provides locals with power.

The Kaniere water race was initially built in 1875 to supply water for gold mining claims and later to generate power for gold mines and domestic supply.

The Kaniere gold rush came hot on the heels of others around the West Coast gold rush capital of Hokitika.  The initial rush occurred in April 1865. Further discoveries soon followed and by the end of 1866 the population of the Kaniere field had reached a peak of 4,200.

In 1869, when the boom of the gold rush started fading, the idea to construct a large water race from Lake Kaniere to the Kaniere diggings was mooted. Selling water to miners was a lucrative venture that could revive the gold field. Despite ambitious hopes for its economic potential, local enthusiasm, and central government investment, the race was not built for another 6 years.

From 1875 the race was used sporadically for alluvial mining until 1907 when Ross Goldfields Ltd purchased it. The company planned to mine the deep alluvial deposits at Ross but water in the workings hindered this. A number of solutions were unsuccessfully tried, until finally the notion surfaced to build a power station some 25km away at Kaniere Forks. Electricity from here could be used to pump the excess water from the flooded mine. Nine km of the Kaniere race were brought back into service, and electricity flowed from the Kaniere Station to Ross from 1909 to 1916.

The Rimu dredge in operation

The race was in demand again in 1921 to supply the electricity needs of a large gold dredging operation at Rimu. In its 31 years of operation the dredge recovered 320,000 ounces of gold. With powering the dredge the priority, power fluctuations often occurred in Hokitika. To remedy this, a second power station was built at McKays Creek in 1931.

In 1953 the Rimu dredge stopped operating and the race’s contribution to gold mining was over. During its gold mining career, the Kaniere Water Race also supported some domestic power supply, which became the primary use for the power scheme from 1960.

The raceman’s job was to control the flow of water through the water race. Water races were maintained in the same way roads used to be – a raceman was positioned every few miles to look after a section of race.

The raceman constantly checked his section for any blockages by debris such as fallen trees, and to ensure the embankment and timber supports hadn’t collapsed. Sometimes they would work all through the night to keep the race open as they could not afford to have the station out of operation for long. Often the raceman would float down the race on a raft carrying timber from Wards Road. The timber was used to repair the race.

Two huts were built for the racemen to live in, one at Wards Road, one at Lake Kaniere.

The hut at Wards Road

The hut at Wards Road was there before the access road was built. The only way to get to the hut was to follow the race.

Irene Muir worked as a cook at the sawmill at Wards Road, and recalls that her family used supply her with milk by floating it down the race from their farm at Lake Kaniere. Mrs Muir also used water from the race for washing up. 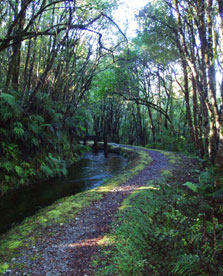 The following men lived at the hut at Wards Road:

Colin Howat Snr – was head raceman until about 1967. He lived in Arthurstown and would bike to work every day.

The following records are held in the DOC West Coast Conservancy Historic Archive.

Part of the original race is still in use today as part of TrustPower’s Kaniere Power Scheme. The Kaniere Forks power station generates around 420kW of power a year. The generators and pelton wheels used are those originally installed in 1908 to supply the Ross mine.