A basic two-bunk hut in the Hokitika area. This unique historic hut was built for government employed deer cullers and is the best surviving example of its type on the West Coast. 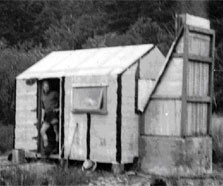 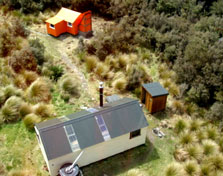 The old hut is one of two at the site, the other is a forest service hut built in 1968

This unique hut was built as a base for government employed deer cullers.

Deer were introduced to New Zealand for recreational hunting in the 1850s.  By the 1930s deer populations had swelled and organised culling began.  The hunters spent months at a time working in isolated locations deep in the wilderness.

Deer cullers’ camps were so remote that building materials and supplies had to be air dropped in or found on site.  This rustic hut was built from a mix of sawn air dropped timbers and hand adzed timbers from the
surrounding bush.

Despite some alterations over the last 50 years, Cedar Flat Hut remains the best surviving example of its type on the West Coast.  In 1957 four huts were built to this same design; however Cedar Flat is the only one with hand adzed timbers.  This style of hut was built prior to the standard NZ Forest Service national models that became common from 1958.

The hand worked timber and traditional carpentry methods used in the hut are examples of once common building techniques that are no longer used, and a form of wood working expertise that very
few people now have.

Cedar Flat is a very popular destination. Today visitors can gain an appreciation of the isolated and rugged lives lead by deer cullers by staying overnight in this rustic hut. The old hut is one of two at the site, the other being a later forest service hut. Nearby are the Wren Creek hot pools, a great place to unwind and see blue duck on the river.

Access to Cedar Flat is along the Toaroha track. The track in follows an old sawmill tram for part of its length; the rest of the track was a 1930s foot track built by the Westland County Council to facilitate access to the hot pools.

Cedar Flat Hut retains a considerable amount of original fabric and best retains the basic aesthetic of this type of hut.  DOC maintains the hut for visitor use.  Over time the following modifications have been made: