View from the Point Elizabeth walkway

Located in Greymouth area in the West Coast region

Mountain biking at night time only is allowed 1 April - 30 September.

Point Elizabeth Walkway is an interesting coastal/bush walk with good views and a few sites of historic interest along the way.

From its northern (Rapahoe) end the track climbs to an open terrace with slowly regenerating in native growth after years of farming. Beyond there, in Rapahoe Scenic Reserve, one of the finest remaining tracts of mixed coastal forest in New Zealand extends from the limestone range out to the cliff edge. 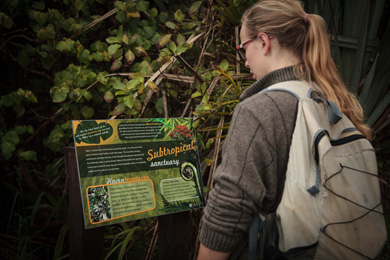 Gradually the sea can be heard again as big forest gives way to more stunted growth and waves of flax on the Point Elizabeth headland. The exposed rocky point lookout has views south toward Mt Cook, north along a spectacular rocky coast and inland towards the Paparoa Mountain Range.

Offshore 'sea stacks' remain as a reminder that the point once extended much farther out to sea. After winding and undulating for a while the track begins to descend toward Cobden's North Beach.

The track is mostly level, as it follows an old water race that miners used to sluice their gold claims.

Mountain biking is permitted on Point Elizabeth Track from 1 April - 30 September during the hours of darkness only.  No mountain biking is permitted during daylight hours.  That is 1hr before sunrise and 1hr after sunset.  Bikers must use adequate night lights at all times.  Caution and care must be taken to prevent injury to any native wildlife encountered on the track.  Follow the Mountain Bikers Code.

Point Elizabeth can be easily accessed from Greymouth. To reach the northern end drive to Rapahoe on SH6 from Greymouth (about 11km). For the southern end drive via Cobden onto Bright Street, Domett Esplanade and North Beach Road (about 6 km). There are car parks at both ends.

The stunning subtropical forest features nikau palms and mamaku (black tree fern) intertwined with supple jack vines and kiekie. There are also large podocarps like rimu, kahikatea and miro along with epiphytic northern rata adding a splash of crimson during summer.

Native birds such as fantails, tomtits, grey warblers and bellbirds are plentiful at any time of year.

The track follows an old water race built by 19th century miners to sluice their gold claims. Much of the track formation also dates from this era, including deep cuttings that would have required considerable effort with pick and shovel.

Walk in the footsteps of historic gold miners and strike it rich with stunning sea views, iconic West Coast bush and wildlife.

Walk in the footsteps of historic gold miners and strike it rich with stunning sea views, iconic West Coast bush and wildlife.