Located in the Wairarapa region

Wairarapa Moana Wetlands has extensive wetlands where fishing and birdwatching are popular activities.

This is the largest wetland complex in the southern North Island, supporting native plants and animals of national and international importance. Wairarapa Moana is made up of the beds of Lake Wairarapa and Lake Onoke and the publicly owned reserves around them. This covers over 9,000 hectares, from Lake Domain in the north to Onoke Spit, 30km away, at Palliser Bay.

Find things to do and places to stay Wairarapa Moana Wetlands

Lake Wairarapa, Lake Onoke and their associated wetlands and scattered forest remnants are the largest wetland system in the lower North Island.

The wetlands contain mudflats, lagoons, sand flats, marshlands, salt marshes and back waters which are regularly flooded or exposed, depending on the season. Over the years, weather patterns, manipulating the lake levels, clearances and drainage for farming have impacted on the size and nature of the wetlands and surrounding private pasture land.

The area is considered to be of national and international importance for indigenous plant and animal communities. It is spiritually and traditionally important to Maori as an area for gathering food such as eel, fish, waterfowl, and plant material, including flax and raupo.

The majority of the Wairarapa Moana Wetlands are protected as either conservation areas or wildlife and scenic reserves, managed by DOC.

The Department of Conservation is working with iwi, other management agencies and stakeholders to restore wildlife habitat that has been degraded through human use. Agriculture and river development, flood control, and waterway diversions have resulted in the drainage of large areas of the wetlands, reducing their ecological values.

Restoration projects to restore the balance of nature on the public land are supported by farmers and the wider community, with DOC, iwi, regional and local councils working together to protect the wetlands for future recreational enjoyment.

The diverse habitats in the Wairarapa Moana Wetlands attract a wide range of wetland birds - almost 100 bird species have been recorded over the past two decades, including some international migratory birds. The lake's eastern shore, in particular, is a habitat of national importance for water and wader birds.

Changes in the quality of the wetlands have led to the decline and even local extinction of some species (including fernbird) and an increase in others, such as pied stilt, mallard and paradise shelduck.

Lakes Wairarapa and Onoke and surrounding wetlands have also been identified as wetlands of national importance to fisheries. Among 10 native species which migrate between the sea and fresh water are long finned and short finned eel. The nationally threatened brown mudfish and giant kokopu have also been recorded in the wetlands.

The lake edge, which is regularly inundated by water and then exposed, supports a submerged “turf” community of small native plants which is greater in area than in any other North Island lake. Turf plants also grow on the edges of some of the ponds cut off from the main lake. The nationally threatened mistletoe K. salicornioides grows on the western lake shore.

Scattered stands of kahikatea and cabbage trees and isolated totara, ribbonwood, kowhai and lacebark are remnants of the extensive areas of native forest that once existed in the area.

The Lake Shore Scenic Reserve on the western shore is the last remaining area supporting the vegetation sequence that would have existed between the Rimutaka Range and Lake Wairarapa before agricultural development. It comprises a stand of mainly black beech, with some patches of titoki and karaka, and shrubs closer to the lake margin.

The aquatic weeds hornwort and lagarosiphon have infested some of the ponds, threatening the ecological values of the area. Hornwort grows stems of up to six metres long, forming submerged “forests” and has the ability to spread rapidly and smother other species. Lagarosiphon, which also quickly spreads, has brittle stems up to a metre long, tiny pinkish flowers, and dark green leaves tapered to a sharp point.

People visiting the area are urged to prevent the spread of these weeds by washing their boats and dogs after they’ve been in the water (check, clean dry). 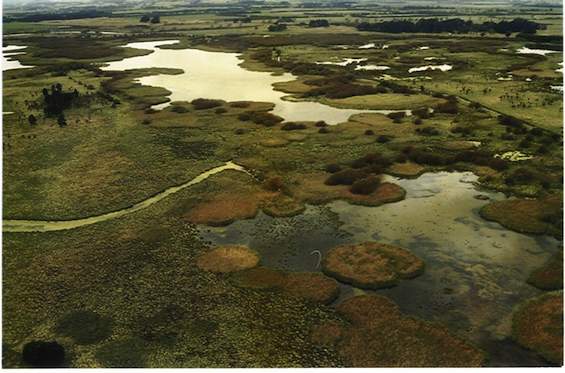 The wetlands are traditionally and spiritually important to Maori as an area for food gathering, including eel, fish, waterfowl, and plant material, in particular, flax and raupo. 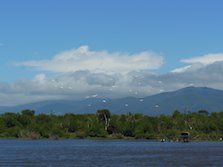 Located in the southern Wairarapa plains near Featherston, about an hour’s drive from Wellington City.

Head north from Wellington, turn off SH2 at the start of Featherston and onto the Featherston-Martinborough Road – the domain is around 8 km from Featherston. Turn right onto Murphy’s Lane and then right onto Lake Domain Road which takes you to the domain.

Head north from Wellington, turn right off SH2 at the start of Featherston onto the Western Lake Road which takes you around the shores of the lake to the signposted reserve. The reserve is around 16 km from Featherston.

Turn right off the Featherston-Martinborough Road onto Kahutara Road. Drive about 15 km until you reach Parera Road on the right. About 3 km down Parera Road there is sign-posted access to Boggy Pond. Follow the stopbank track for 800 m to a bird viewing hide with close-up views of Boggy Pond. The track carries on for approximately 2.4 km and joins back up to Parera Road.

Closed gate on right is access way to lake

Another 3 km along Parera Road from the Boggy Pond sign is an access point for the Wairio Block. The first, northern gate at the sign-posted Ducks Unlimited restoration area allows public access through the site. The walkway is currently unformed but is an easy route through to the lake.

There are plans in place to create a maintained walkway to the eastern lakeshore beginning near the Boggy Pond access point.

Access is near the end of Western Lake Road, Palliser Bay. Turn on to Beach Road, a short gravel road with a small carpark area at the end of it. Note that there is a small tidal stream to cross to get to the spit so be prepared to get ;wet feet. When the gap through the spit is closed this stream does flood and you may be unable to cross. Alternative access is along the coast at Ocean Beach.

Get involved with conservation groups working with DOC in the Wairarapa.