One of the world’s oldest generators in continuous operation has been keeping visitors staying at Dawson Falls warm since 1935.

The generator was built by the General Electric Company of Schenectady, New York around 1899 -1901. While full details of its working life before coming to Dawson Falls in 1935 are not clear, it is thought that it may have been used in Tasmania, military camps in Wellington and to light the Wellington Cable Car system.

In 1935 the power station was installed to service tourist accommodation at Dawson Falls in the Mt Egmont National Park. The Dawson Falls Tourist Lodge had been opened in 1896 but its remoteness meant it was not connected to any electrical suppliers (the nearest being 12km away at Kaponga). With an increasing number of visitors staying at the lodge in the 1930s came increased demand for improved facilities especially lighting and heating. 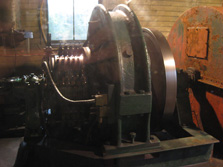 The generator and drive wheel

The Egmont National Park Board, which was responsible for power supply in the national park, had limited funds and bought plant that was predominantly second-hand to be housed in the station being constructed by a team of unemployed men. Within months of the station’s completion, a huge flood nearly carried the plant away and it was subsequently located to its present location 10 metres above the Kapuni stream. 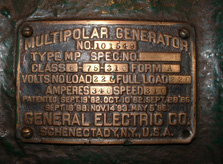 The power station holds a pelton wheel powered by water from the Kapuni stream through a 635m penstock (pipeline).  The pelton wheel drives a direct current generator, a governor, flywheel and a small alternator with an output rating of a possible 74 kW (100 horsepower).

The generator has never been required to produce its full output and is currently operating at around 40% of its potential capacity. This is one of the key reasons it is in such good working order today. 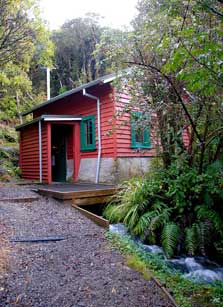 The station and original equipment are still in use today. While the lodge (now the Dawson Falls Mountain Lodge) has been connected to the national grid since 1982, hydropower from the station is still used for some purposes such as heating and lighting.

For safety reasons visitors are unable to go into the power station but have a good view of the interior of the machine room, enhanced by push-button illumination. DOC has also installed a ramp to enable accessibility to the site for visitors with restricted physical abilities.

The power station has been well maintained over its lifetime.  In 2005, the Taranaki Electricity Trust were the principal sponsors of restoration work where the penstock (pipeline) was replaced and the generator was reconditioned. This ensures that the power station will be able to keep supplying power well into the future.

Dawson Falls Power Station is located near the Dawson Falls Visitor Centre. It sits at the top end of Manaia Road, 14 km from Kaponga. Kaponga is an easy drive west of Stratford and Eltham. Walk down Manaia Road from the visitor centre and turn left at the power station sign.