What is left of the Auckland Island's earliest recorded shipwreck and the remnant fireplace of the survivors’ hut are found at Carnley Harbour (north arm).

A few ribs of Auckland Island's earliest recorded shipwreck, the Grafton, lie in the beach gravel at the southern end of Carnley Harbour. The anchors rest on the seabed out from the shore. Nearby the remnant of a stone fireplace is all that is left of the Epigwaitt; a hut the castaways built using the ship's remains.

The Grafton was a small schooner hired by a group of traders from Sydney, Australia in 1863 to prospect for tin and attempt some sealing on Campbell Island. Captain Thomas Musgrave (from America) was the nephew of one of the traders, and Francois Raynal (from France) was their representative on the voyage. Also on board were Norwegian seaman, Alexander McLaren (known as Alick); English seaman, George Harris; and Portuguese cook, Henry Forgés.

The five spent a month at Campbell Island but were disheartened by the lack of tin and the scant sea lions. On 29 December they set sail for Sydney via the Auckland Islands, entering Carnley Harbour on 1 January. The weather deteriorated rapidly and a night of rough seas caused one anchor chain to break. The other anchor dragged until the vessel was grounded on 3 January 1864, near to the shore. 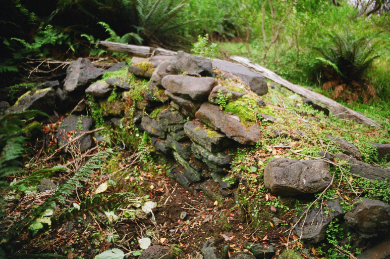 For almost twenty months the crew were forced to survive with what they could salvage from the wreck or gather from land and sea. They first lived in tents built from sails, then built a hut which they lived in for a year and a half. This was christened Epigwaitt and was constructed from timber salvaged from the ship and felled from the surrounding forest.

Published accounts detail how the party built their own forge to work metal and made charcoal to fire it. They also burnt shells to make lime mortar for the hut’s chimney and cleared a boat run to access the sea more easily.

The group taught each other their different languages, made soap as well as card and board games to keep themselves amused. One of the crew was taught to read and write, and the party used seal blood for writing when their ink supply ran out. They also had mathematics lessons.

Finally, they accepted that no rescue was coming for them and they realised they would have to save themselves. So they worked for some time to modify a small ship's boat to reach New Zealand. Then on 19 July 1865, three of the men set sail for Stewart Island. Five days later they entered Port Adventure where they raised the alarm. A ship was sent from Invercargill to rescue the two remaining men from the island.

The story of the wreck and castaway survival was published in two detailed accounts, one by the Captain, Thomas Musgrave (in English) and the other by Francois Raynal (in French later translated to English).

Their dramatic story of survival through ingenuity and resourcefulness was widely read in both languages and is thought to have inspired Jules Verne’s 1874 novel 'The Mysterious Island'.

News of the wreck along with that of the Invercauld at the northern end of the Auckland Islands four months later caused a groundswell of public concern about the plight of castaways. The story of the Grafton castaways helped emphasise the vulnerable position of ships and castaways in southern waters. This led to search expeditions by the Victorian government and then by New Zealand. Each also began stocking provisions for shipwrecked sailors, initiating sixty-four years of subantarctic castaway provisioning.