A photo of the German astronomy team at their station.
Image: Hermann Krone | Creative Commons

On 9 December 1874, eight German scientists studied a transit of Venus from Auckland Island. A rare opportunity allowing them to measure the distance between the earth and the sun.

9 December 1874 was an important day. Around the world, science teams prepared to study the transit of Venus. This is when the planet Venus can be seen from Earth as a black dot that moves across the sun. These sightings of Venus have great historic significance as they helped to make the first measurements of the distance between the Earth and the sun. 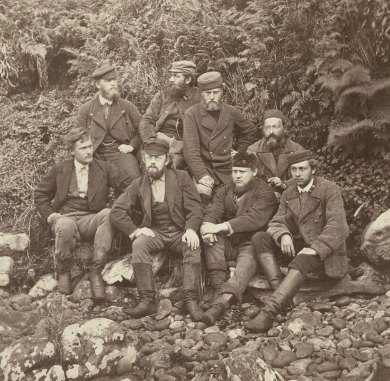 On 15 October 1874 a team of eight German scientists arrived onboard the Alexandrine, docking at the northern end of Auckland Island at Port Ross harbour. The group were one of the numerous expeditions who had set out around the globe to record the event.

The team quickly erected the kitset buildings they had brought with them from Melbourne, Australia, where they had stopped for supplies. They included a house, a wooden shed for equipment to measure magnetic variation, and an iron shed in which a tool to assess the tide was placed. A range of instruments were required to record and measure Venus as it obscured a small area of the sun. There were also instruments needed to assess changes in the environment during the event. Brick plinths were constructed to ensure instruments could be kept stable.

After months of planning and preparation, the scientists awoke on the morning of the transit to find the sky overcast. However, at noon, a breeze sprang up which broke the clouds just as the transit had commenced, much to their relief.

The transition was also recorded by a party of French scientists at Campbell Island, and at a range of other sites throughout New Zealand.

The transits of Venus occur as a pair, approximately eight years apart. After the pair has been seen they won't be seen again for over 100 years. Each of transits is separated by long gaps of around 105 and 122 years.

Five brick instrument pillars are all that remains to be seen of the German Transit of Venus expedition. The location is of national and international importance in the history of science and exploration as a result of this and other expeditions. When the German team arrived in the area it had already been visited by three scientific expeditions during 1840 and was visited again in 1907.