All that remains of the ill-fated Enderby Settlement, New Zealand’s southern-most planned settlement, is a few indistinct building platforms, a faint road alignment, and a small cemetery.

In 1849 Charles Enderby, director of a prominent whaling company, obtained the support of the British Government to establish a land based whaling station and colony at Port Ross. The island was not part of either New Zealand or Australia at the time, so it was an independent colony.

Three Enderby Company ships loaded with stores and settlers landed at the Auckland Islands in December 1849, where they discovered around 70 Māori and Moriori already in residence. The settlers included a surveyor, clerks, a storekeeper, bricklayers, masons, agriculturalists, labourers and medics, with 16 women and 14 children.

Rata forest was cleared and 18 prefabricated buildings including a church were built, and the settlement was officially opened on 1 January 1850. Governor of New Zealand at the time, Sir George Grey, visited the settlement in November 1850 and observed the struggle the settlers were having.

The cold, damp climate and the acidic soils made agriculture impossible, and while a few whales were seen, none were caught. There had even been a murder/suicide attempt which turned out to be a part of a steady deterioration in order at the settlement. While the settlement had been well planned and settlers chosen well according to their skills, the nature of the environment at the islands had been completely underestimated.

It proved impossible to grow crops so supplies had to be imported from Sydney, but this cost was not offset by the expected income from whaling. Finally, the ill-fated settlement was dismantled and closed on 5 August 1852 with the departure of the last of the settlers.

Interred in a small cemetery at Erebus Cove are two infants who died during the short lived Enderby settlement. 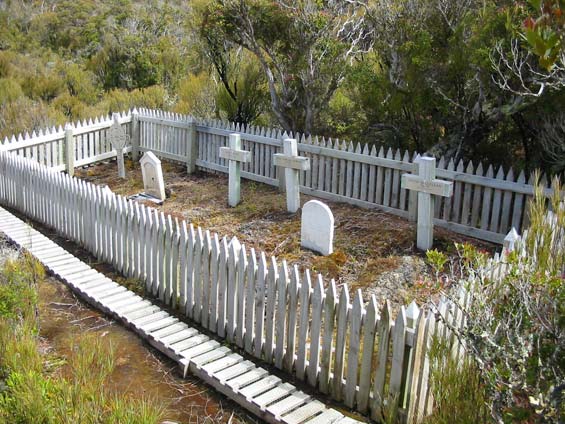 Perhaps the most poignant of the graves is that of Isabella Younger, who died 22 November 1850 aged three months. Her headstone is reputedly made of a mill wheel – brought by the settlers to mill grain that never grew, and carved into a headstone by her grief stricken father. The other infant burial is Janet Stove whose grave is marked by a replacement timber marker as the original one is long lost to decay. She died age 14 weeks on 10 October 1851.  Also buried here during the settlement, now without burial marker, is Thomas Cook (d. 7 September 1951 aged 22), and with a replacement marker, John Edward Downs (d. 21 February, 1852).

The remainder of the burials are but a few of the dozens of mariners who lost their lives during shipwrecks or while castaway on the islands. These include John Mahoney, who made it ashore from the wreck of the Invercauld but who did not survive to be rescued. His is one of the two remaining headstones in the cemetery.

Another is Jabez Peters who died as a result of the wreck of the Dundonald in 1907, on Disappointment Island. His remains were reinterred at the cemetery when the remainder of the crew were rescued and his grave is marked with a replacement marker. The last replacement marker is that for David McClellan who died aged 60 on 23 September 1867. McClellan was one of 15 who made it ashore from the wreck of the General Grant, and the only one to die during the castaway’s time on the islands.