Located in Whangārei Heads area in the Northland region

This pleasant and easy walk takes you around the coastline across a causeway to Motukiore Island, and is a great summer family outing. 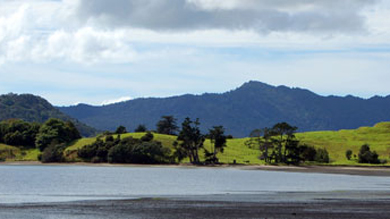 The track out to Motukiore Island starts off Whangārei Heads Road just past the Pines Golf Course.

Be prepared to get your feet wet as the track makes its way through the mangroves with the 'Pines' fairways on one side and the Whangārei Harbour on the other.

The sandspit out to the island is walkable at low tide only. Crossing is possible up to 3 hours either side of high tide.

Once out on the island you can roam as you like, from the prominent pā at the southern end of the island to the site of an historic homestead at the northern end.

Motukiore Island is located in Parua Bay, approximately 8 km east of Whangarei, 400 m east of the end of Manganese Point

Motukiore Island is a 5 ha recreation reserve. Mature pōhutukawa trees surround the shoreline and the birdlife is abundant around the Island. Terns and oystercatchers are frequent visitors.

Motukiore Island has a fascinating history. It was both an important vantage point for Maori in prehistoric times, and a focus of early European industry in Whangārei Harbour.

Maori occupation of the island is evidenced in the form of the impressive terraced Maori pa at the southern end.

The Pa consists of a series of artificially levelled earthen terraces rising up the slope to a central tihi or platform at the summit. Typically, whare or houses would have been built on the terraces, along with associated structures like cook houses, drying racks for seafood and storage for fishing and gardening equipment.

The pa was defended by the slopes of the hill itself, probably augmented by wooden palisades and the two defensive ditch and bank features still visible on the ridge below the terraces.

Below the pa, the flats may have been gardened, and gardening may also have taken place on the nearby mainland. The gathering of fish and shellfish and the importance of marine resources to Maori is evident by the thick layer of midden or cooking refuse which rings the foreshore of the island.

European involvement with the island began in 1839 when Gilbert Mair senior landed men on the island to establish a pit-sawing venture to provide spars of native timber for ships plying New Zealand waters. The going was hard and circumstances lonely and difficult and the venture folded in less than six months. At about the same time the island was sold as part of a much larger block to Messrs Scott, Russell and Anderson by a group of local Maori chiefs, a sale confirmed by the Crown Native Land Commission in 1844.

For the next 130 years the island was farmed by a succession of local and absentee owners who left their own mark in the form of homestead gardens and windbreaks on the northern and western sides of the island, farm fences and stockyards.

Around 1900 a homestead was built at the northern end of the island and in the 1930s a farm managers residence was built on the western side of the island. A New Zealand Farmers Weekly article from 1941 extolled the small-farming practices used on the island along with its many other virtues.