2011
View a poster about Whangarei Harbour Marine Reserve - Waikaraka, showing the fish, shellfish and bird life you will see, and outlining the history of the reserve. 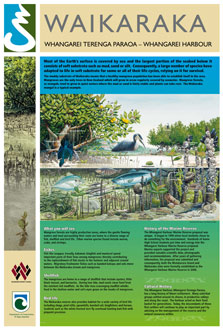 Full text of the poster

Most of the Earth’s surface is covered by sea and the largest portion of the seabed below it consists of soft substrata such as mud, sand or silt. Consequently, a large number of species have adapted to life in soft substrate for some or all of their life cycles, relying on it for survival.

The muddy substrate of Waikaraka means that a healthy mangrove population has been able to establish itself in the area. Mangroves are the only trees in New Zealand which will grow in areas regularly covered by seawater. Mangrove forests, or mangals, tend to grow in quiet waters where the mud or sand is fairly stable and plants can take root. The Waikaraka mangal is a typical example.

What you will see

Mangrove forests are highly productive zones, where the gentle flowing waters and mud surrounding their roots are home to a diverse range of fish, shellfish and bird life. Other marine species found include worms, crabs, and shrimps.

Fish like snapper, trevally, kahawai, kingfish and mackerel spend important parts of their lives among mangroves; thereby contributing to the replenishment of fish stocks in the harbour and adjacent coastal waters. Migratory freshwater fishes such as banded kokopu and eels move between the Waikaraka stream and mangroves.

The mangroves are home to a range of shellfish that include oysters, little black mussel, and barnacles. During low tide, mud snails sieve food from the nutrient rich mudflats. As the tide rises scavenging mudflat whelks feed in the shallow water and cat’s-eyes graze on the trunks of mangroves.

History of the Marine Reserve

The Whangarei Harbour, Whangarei Terenga Paraoa, has a long history of Maori settlement. Many subtribal groups settled around its shores, in productive valleys and along the coast. The harbour acted as their food basket for generations. Today, the descendants of those first settlers will continue to play an important part by advising on the management of the reserve and the natural resources within.

Published by Department of Conservation and Whangarei District Council