Located in Kahurangi National Park in the Nelson/Tasman region

Historic Cecil Kings Hut is one of the few surviving buildings of the depression mining in the Wangapeka. Today it is available as accommodation for trampers in Kahurangi National Park. 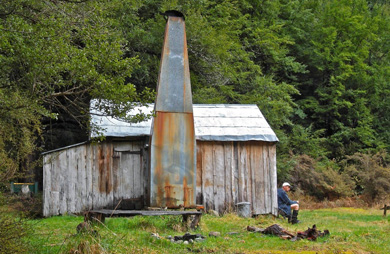 There are varying versions of the story behind the building of this hut. Cecil King, a well known local identity, has claimed that he built it alone from a single Red Beech from the clearing beginning in September 1935. The Beech now standing beside the hut was planted by him as a replacement.

However it appears that King was one of a party including Boyd and Hunter who worked the claim around the hut on Government subsidy and the hut may have been built by all three. The tailings in front and behind the hut are a result of this Depression mining.

Each summer for the next 46 years King continued to return from his Wellington home to work his claim and became a well known local identity offering a cup of billy tea and conversation to the increasing number of trampers using the track. When he was not using the hut it was left open for others. Cecil King died on 22 June 1982 and his family scattered his ashes around the hut. Kings hut has a historic theme of gold mining.

Kings Hut is an excellent example of typical backcountry timber slab hut construction once commonly used by settlers and miners from the late-1800s and into the 1900s.

The hut was built from slabs and battens of red beech split from local trees and dressed with axe and adze. It has always been a four-bunk hut, beech pole framed, clad in wooden slabs and roofed with shingles (later covered with iron).

In 1991 Max Polglaze repaired the hut using silver beech. He replaced the rotten pieces of exterior cladding and floorboards and reinstated the internal framing to straighten the hut’s lean.

The bunks were repaired and the leaks in the iron covered shingle roof fixed. Although single roomed and rectangular the hut has a small annex which gives access to one of its 2 doors. It has a simple stone fireplace and the original wood slab chimney was replaced by a Forest Service galvanised iron one in the 1970s.

The hut will be maintained to protect its historic fabric and minimise deterioration. A conservation plan has been prepared to guide its management.

The hut is located on a grassy clearing in the beech forest on the Wangapeka Track at the junction of the Wangapeka with its South Branch. This clearing is traditionally known as ‘The Forks’.