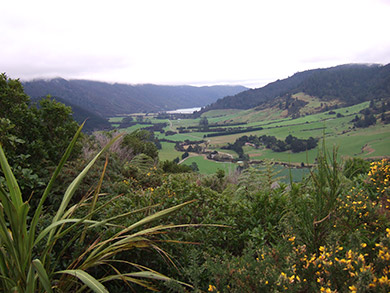 Walking up the hill from Camp Bay, there's a double-whammy. Your phone 'bing, bing, bing' announces coverage, while farmland and distant Kenepuru Sound suddenly come into view (bad luck if it's a foggy day!). The well-ordered paddocks are such a contrast to the Punaruawhiti/Endeavour Inlet forest you are leaving behind.

Reconnecting with QCT Stories, you will now have reasonably good coverage all the way to the end of your walk at Anakiwa. Here are a few stories associated with nearby features.

Kenepuru translates as 'sandy silt', referring to the sheltered, relatively shallow and sandy seabed of this inland Sound that is a long way from the swirling currents of the open sea.

Kenepuru Sound is a spawning ground for many species of kaimoana/seafood, a popular recreational fishing ground, and home to many commercial marine farms.

Kenepuru Sound is the water you will have on your right, all the way to Te Mahia Saddle, 31 km along the track.

There's often a great view of Parororangi/Mt Stokes from here, to your north. Parororangi or 'stormy sky' has been an important weather indicator for generation after generation of Māori. The great explorer Kupe understood the value of naming features to help his descendants with their oral maps.

Europeans named the mountain after John Stokes, captain of H.M.S. Acheron that surveyed the New Zealand coastline, visiting these waters in 1849.

There's an aviation mystery surrounding Mt Stokes. Somewhere up there is believed to lie hidden the wreckage of the first plane to attempt a Trans-Tasman flight. In 1928 'Aotearoa' was expected to take 14 hours to fly between Sydney and Wellington. The pilot's last radio contact was late in the day. That evening, in cloudy conditions, two men on a launch reported hearing a plane. Despite extensive searches, no wreckage has ever been found.

View from near Shamrock Ridge, where you can see Lochmara Bay in Queen Charlotte Sound and Puketea Bay in Kenepuru Sound. Nearer Te Mahia, take the sidetrack to Onahau Lookout where you can see three sounds!
Image: Janet Bathgate ©