An embellishment for society. 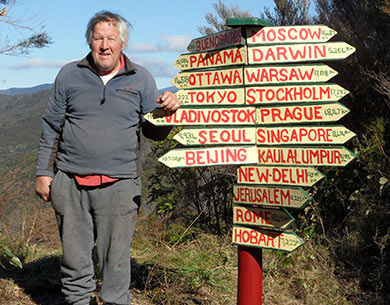 Rod Eatwell beside one of his signs at Eatwell’s Lookout
Image: Eatwell family ©

The sidetrack up to Eatwell's Lookout is well worth breaking your stride. If you thought Deep Bay was a grand view, then this is even grander! Walk up to enjoy Rod's favourite spot.

Rod Eatwell is considered to be the grandfather of the Kenepuru Walkway that later became part of the Queen Charlotte Track.

In the early 1980s, the Lands & Survey Department proposed joining up old, reopened bridle tracks to form a walkway from Anakiwa to Ship Cove. A track along the Kenepuru Ridge was needed. Rod and Kath Eatwell, private landowners of part of the ridge, got right behind the project. With their children and grandchildren – and with slashers, wheelbarrows and shovels – they opened a track section through their land.

Inspired by Rod's efforts, other landowners joined in.

By 1985 funding became scarce and parts of the track were closed. Undeterred, Rod and his friends continued to keep the section between Black Rock and Punga Cove free of gorse.

Following the formation of the Department of Conservation, the NZ Air Force sponsored a major clearance and realignment of the Kenepuru Ridge Track. It took 150 men three weeks to complete.

In 1991 when the 'joined up' Queen Charlotte Track was officially opened, Rod was there to cut the cake and say a few words.

"If people do something for people that they love and enjoy, and if I can keep the minds of young people wholesome and loving the outdoors, that's an embellishment for society."