Located in the Marlborough region

Blumine Island/Oruawairua is one of several predator free islands in Queen Charlotte Sound and is open to the public.

The island provides a wonderful opportunity to see several rare bird species such as saddleback and orange fronted parakeet and get up close and personal to some of our more common species like weka as well.

Orange fronted parakeet were translocated to the island in 2011 and 2012. These birds are classified as “nationally critical” and the species has a high risk of extinction. They survive in only a handful, isolated populations. Blumine Island offers a unique opportunity to see a species that was once widespread throughout New Zealand but is now our rarest parakeet.

Blumine Island is also home to the world’s rarest kiwi – the rowi. Three pairs of non-breeding rowi were moved to the island in 2010. It is hoped that they may be encouraged to breed on the warmer, food rich soils of Blumine Island.

The saddleback or tīeke belongs to New Zealand's unique wattlebird family (Callaeidae), an ancient group which includes the endangered kōkako and the extinct huia. The South Island saddleback reached the brink of extinction last century and today’s birds are descended from 36 saddlebacks rescued in 1964. This species was translocated to Blumine Island in 2009. Listen out for its distinctive call as you walk around the island.

Much of the work that has been carried out on Blumine Island has only been possible due to partnerships and the support of other organisations.

The upgrade of the Oruawairua track was made possible due to the sponsorship from Blacks Fasteners who are also sponsoring the translocation of Mohua to the island.

Outward Bound have assisted in carrying out track work and other maintenance on the island through bringing their students to the island as part of their Outward Bound course.

The Untouched World Foundation support education work on the island and have sponsored many trips for young adults to develop their environmental leadership skills on the island.

Blumine Island has a fascinating and varied history and much of it can still be seen today.

Blumine Island was declared a Pilot and Signal Station Reserve in 1865, but after that was used for sheep farming. A 113-acre scenic reserve was established on the southern side of the island in 1912. All of Blumine Island is now administered as a scenic reserve by the Department of Conservation.

A walk along the newly upgraded Oruawairua track takes you to the gun emplacements and accompanying observation post and magazines.

There are two gun emplacements on Blumine Island that were constructed during World War II. These were constructed because of fears of Japanese invasion and to establish a secure fleet anchorage for the US Navy. They were built by the Public Works Department with work beginning in February 1942. The guns each had an observation post and magazine. Army barracks for the up to two officers and twenty men usually stationed on the island were built at the top of 215 steps. Two scows were used to move materials to build the emplacements to the island. The Public Works Department built a substantial wharf to land workers and supplies. There was also a Public Works Department camp, water and power supply near the wharf. The island's very steep slopes and soft rock caused construction delays. The guns were ready for action by September 1942 and proof fired on 9 March 1943.

The threat of enemy action gradually declined after 1942 and the gun battery went into 'care and maintenance' in September 1943. Most of the day to day work on the island for the officers and men based there comprised monitoring ship movements. The guns were dismounted and moved to the Auckland Division of the Naval Reserve, and the batteries were formally disestablished in December 1945. 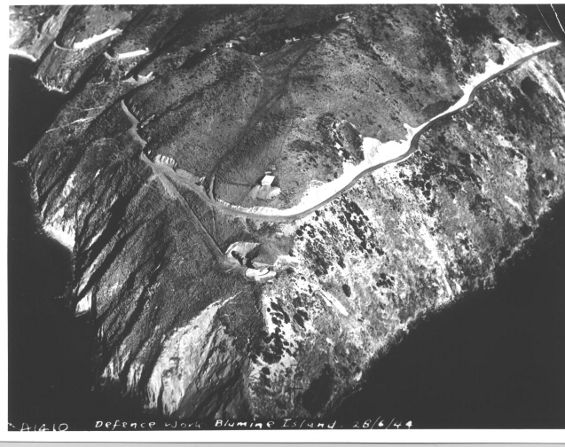 Two pieces of railway iron can still be seen at low tide and mark the site of the old wharf on the north-western side of the island. The Public Works Department camp was on an adjacent terrace; dam remains can still be seen there. Up the well-graded historic road to the north-west is a magazine, and a track forking off that leads to the western gun emplacement. A 20 minute walk further up the historic road takes you to the eastern gun emplacement on a small sidetrack. Another 10 minutes walk takes you past the eastern magazine and then to the bottom of the 215 stairs that lead up to the foundations of the army barracks.

Blumine Island/Oruawairua lies in Queen Charlotte Sound opposite Endeavour Inlet, approximately 22km from Picton. You can get there with your own boat, by water taxi from Picton or sea kayak. There are no moorings or jetty so you will need to be prepared to anchor your boat and to get wet feet.

The east gun emplacement is closed until further notice. Do not enter this structure.

Since you are visiting a pest free island it is vital that you take steps to ensure you do not jeopardise the island’s pest free status!

If you are taking your own boat be sure to check your vessel for rats, mice and ants. Look for signs of rodents such as droppings and gnawing. Keep fresh bait and/or set traps on your vessel and in the area it is stored.

All gear must be free of rats, mice and ants - especially camping gear which has ideal places for pests to hide when stored. Take extra care to clean gear if you have Argentine ants where you live.