History of the Bridge to Nowhere

Forces of nature defeated servicemen returned from World War One. This simple concrete bridge symbolises a failed attempt at back country pioneering by a community of returned World War 1 servicemen and their families.

A reward for returned soldiers

During World War 1, the government offered land in the Mangapurua and Kaiwhakauka valleys to returned servicemen as part of a soldier settlement scheme. In 1917 the first pioneer settlers started taking up the available holdings.

Life was difficult from the start. The land was remote, hilly and untamed. Road access was limited and the settlers had to clear their holdings of dense forest and transform them into farm land. Despite the obstacles, the returned servicemen were enthusiastic and determined. At the peak of settlement there were 30 farms in Mangapurua and 16 in Kaiwhakauka. The shared experiences – through war and these new challenges – created a strong bond, and for a number of years the community thrived. 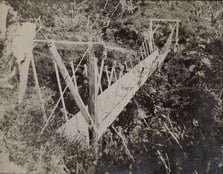 A wooden swing bridge was constructed across the Mangapurua Stream in 1919. This connected the isolated valley with the riverboats that brought goods along the Whanganui River. However the settlers had always expected that roading access would be improved - a more solid bridge would be built and that it would form part of a road between Raetihi and Taranaki.

Planning for the new bridge started when the timber bridge began to rot. In 1936 the new steel-reinforced concrete bridge was finally opened. It was an impressive sight at nearly 40 metres above the river within the steep ravine walls. Today, you can still see
the remains of the old swing bridge from the concrete
bridge that replaced it.

The “valley of abandoned dreams” 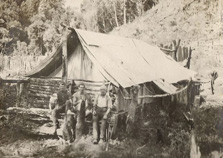 By the time construction was finished, many of the Mangapurua settlers had abandoned their holdings. The physical labour and economic hardship had taken their toll on the returned servicemen and their families. Serious erosion (caused by the clearing of bush), flooding and poor road access were other obstacles that the settlers could no longer overcome.

By 1942 only three of the farmers remained in the valley. They were eventually forced to leave when the government decided that road access would no longer be maintained. By 1944, everyone had gone.
Not only that, they left virtually penniless. 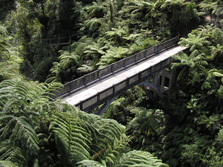 The Bridge to Nowhere today

The concrete bridge – now known as the Bridge to Nowhere – is the symbol of that ill-fated settlement in an area known as the “valley of abandoned dreams”.

The Bridge to Nowhere gets more use now than it did when it was first built. It is the unofficial flagship of Whanganui National Park and a major visitor attraction on the Whanganui Journey – one of New Zealand's Great Walks.

As one of Whanganui National Park’s most visited sites, DOC continues to maintain the Bridge to Nowhere to: Tree felling at the Bridge to Nowhere

Major concrete repair work has been carried out on both the top and underside of the bridge. This was to address the spalling or loosening of concrete that was occurring due to insufficient cover of the reinforcing steel.

Trees have also been removed from the site eliminate the risk of them falling and damaging the historic structure.

As a result of this work the bridge is considered to be one of the best preserved of its type (ferro-concrete style bridge constructed during the 1930-1940s) in New Zealand.

Bates, A. (1981) The Bridge to Nowhere. The ill-fated Mangapurua settlement. (Wanganui Newspapers Ltd).

Walk to an abandoned bridge in the heart of the Whanganui National Park.