Learn about the history of Ruahine Forest Park going back to pre-European times.

Ruahine is said to mean “wise woman” and relates to the granddaughter of the kaitaki (leader) of the Aotea waka.

The Ngai te Upokoiri and Hinemanu hapu (sub tribes) built kainga (villages) in the foothills of the northern and central Ruahine ranges. They used the forests and headwaters for food sources, refuge and for routes to the interior. Southwards the rivers and forests of the ranges provided good food sources for the Rangitane and Kahungunu people.

A number of Māori trails existed over the Ruahine Ranges, one of them being a well known route of the missionary and botanist, William Colenso. After an abandoned attempt in 1845, Colenso and his Māori guides successfully crossed the ranges in 1847. Colenso made six further crossings over the ranges to visit Māori settlements on the Rangitikei River. During these journeys he collected many native plants and provided the first written records of the area.

In the north European settlement and farming began in the mid 1800s. There was large scale forest clearance in the foothills and fires spread far onto the Ruahine Range. To the south European settlement was slower, with foothills being cleared for farms and milling in the early 1900s. Copper was discovered in Coppermine Creek in 1887. Since that time four companies have undertaken mining operations. Today a few tramlines, the magazine shaft and regenerating forest are all that are left to tell of this effort.

In the 1920s, a milling operation was based at Makaroro River and ran for 25 years. The Gardner and Yeoman’s Mill was located at the present Makaroro River carpark. A timber mill also operated from near the end of North Block road from 1930 for 12 years.

Southwards the forests were left largely untouched until the 1930s when milling activity began by the Hawke’s Bay Timber Company. Large podocarp species such as rimu and matai were extracted from the fringe areas. A second milling operation in the 1950s was based at the end of Table Flat Road. Today the fringe forests are predominantly beech and noticeably devoid of large podocarps. Giant tōtara, rimu and matai trees in the outlying reserves are reminders of the great forests which once covered the lowlands and foothills.

During the 1930s the rounded open top of the ranges beckoned to ski enthusiasts, and in 1938 the Rangiwahia Ski Club was formed. A ski tow was built, a bulldozer winched up to level the slopes and a shepherd's hut extended. The hut has since been replaced (Rangiwahia Hut on Rangiwahia Track) and little evidence of the former ski-field remains. 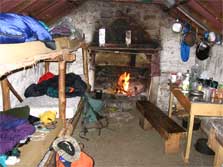 Huts and tracks in the area have not always been used for recreation. The original Ruahine and Herrick Huts were built for shepherds and wild dog hunters.

Ruahine Hut, built in the 1860s, was constructed of red beech framework, slab walls, a snowgrass thatched roof and rock fireplace (the hut has since been replaced). The existing Shutes Hut was built for rabbiters in the early 1900s, when rabbits were common throughout the open tops.

For some time a musterer’s route extended across the Ruahine Ranges via Potae trig in the north to link with Mangaohane Station near Taihape.

On a good day you can see spectacular views across the countryside to Mt Taranaki and the volcanoes of Tongariro National Park. During years with good snowfall, this area is popular locally for cross-country skiing and snowboarding.

Red deer were released in the northern Ruahine in 1883 for game hunting and appeared in the southern ranges in the mid 1920s. Their numbers peaked in the 1930s and 50s, causing extensive forest destruction and government culling began. Many of the area’s huts and tracks were built for deer cullers by the former New Zealand Forest Service and are used today by recreational hunters and trampers. Deer numbers were considerably reduced by commercial venison recovery operations in the 1980s but numbers are recovering, causing damage to the native vegetation of the park.

The Ruahine Forest Park was gazetted in 1976 and its primary functions became recreation, conservation and watershed protection.