The history of Māori iwi Ngāti Whare is written on the hills, valleys, and trees of the Whirinaki.

Numerous historic pā sites are located within the forest, carved wooden bird traps have been found high in the boughs of trees, and living tōtara still bear the preparatory marks of waka carving. 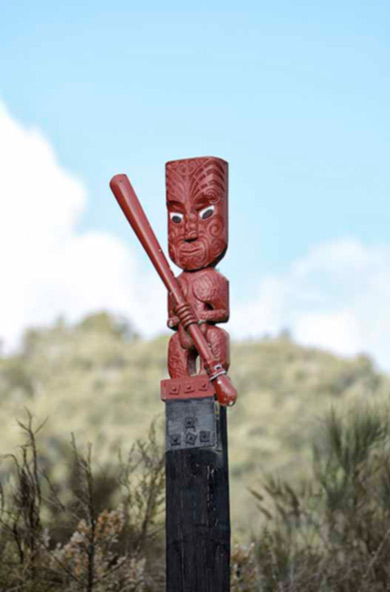 Relationship with the forest

From the time their ancestor Wharepakau Tao-Tao-Ki-Te-Kapua (from whom Ngāti Whare take their name) migrated south to the Whirinaki area, Ngāti -Whare have lived in close relationship with the Whirinaki Forest.

As forest dwellers, the people of Ngāti Whare were dependent on the rich food resources of the forest, where birds were plentiful and held in high esteem.

The taking of birds was strictly controlled and rāhui (prohibition) would occasionally be put on sections of forest to allow bird populations to recover.

The forest also provided many other necessities: wood for shelters, waka, weapons, fortifications, and carvings; bark for household vessels and roofing; vines for lashing and hīnaki (eel pots); and feathers for clothing.

Fern root was a staple food product and was cultivated in clearings created in the forest and maintained by fire and shifting cultivations. Many other forest plants were used for rongoā (medicine).

Nowadays, Ngāti Whare's kaitiakitanga (guardianship) of the forest is officially recognised and they co-govern the park with DOC.

Ngāti Whare has established a native nursery in the Minginui village and has long-term plans to restore hundreds of hectares of land neighbouring the Whirinaki back into native forests.

Minginui, once home to sawmills that processed thousands of native logs, is now home to a nursery that will restore the native forests lost to logging.