Cuvier Island Light Station is one of the most complete historic light stations in New Zealand. 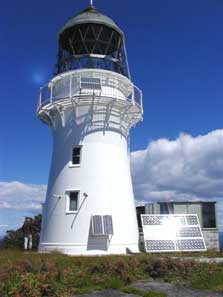 Lit in 1889, the Cuvier lighthouse was the first cast iron light tower manufactured in New Zealand. This represented a significant advancement for New Zealand industry.

Cuvier is the most distant of the offshore lighthouses and contact with the outside world was restricted to the delivery of mail and supplies – every three months.

The intense isolation proved challenging for the keepers and their families whose lives at the station were ruled by the elements.

With the automation of lighthouses most of New Zealand’s light stations have been partially or completely demolished.

The light station on Cuvier is one of the three most complete historic light stations in New Zealand, along with Stephens Island and Tiritiri Matangi.

Automated in 1982 and now run by solar power, the lighthouse continues to operate and is one of the most visually spectacular in the country, set against a background of stunning seascapes.

DOC maintains all the historic sites on the island including a WW2 radar station, and the structures associated with the light station.

In the bush on the higher parts of the island there are several Māori sites including a pā, garden terraces and pits. 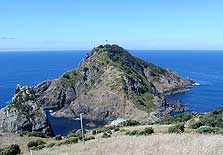 Cuvier Island is a nature reserve and there is no public access.