Although over 60 dams were built in the Kauaeranga Valley, only one remains substantially intact.

The Kauaeranga Valley was once adorned with magnificent kauri trees. Favoured for its thick, straight trunk and durable knot-free timber, kauri was highly sought after by early settlers.

The abundance of kauri in the valley drew pioneering bushmen to the area. From the 1870s bush camps were set up throughout the valley and the area was logged extensively over the following 60 years.

When all but the most inaccessible kauri within the valley had been logged, the tramline was pulled up and the dams, bush camps and other relics gradually fell into ruin as the forest slowly began to recover. In 1970 the remaining sections of native forests were protected as part of the Coromandel Forest Park. 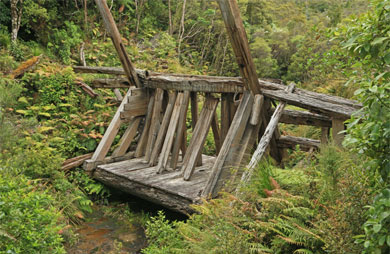 Of the many structures built by kauri bushmen, the driving dams have proven the most durable, and are arguably the most distinctive and evocative relics of the industry.

Over 60 dams were built in the Kauaeranga Valley. However, today only one, Dancing Camp, remains substantially intact. If you want to see how the dams worked there is a one third scale working replica just ten minutes walk from the visitor centre.

Although Dancing Camp is one of the more substantial remaining dams prior to partial restoration work in 1994 its condition was fair (Pearson 1994:7). Virtually all the faceplanking had disappeared and many of the main stringers and rafters had collapsed or had extensive sections of rot.

A Conservation Plan was prepared (Pearson 1994) and the work (partial restoration) and timber treatment was undertaken in 1995 (Ritchie 1995). Since then there has been one retreatment (CD50) in 1998.

Dancing Camp dam was built by Jim Angel in 1924, towards the end of the period when driving dams were extensively used. Between 1918-1928 some 27 million linear feet of kauri was removed from this area in the upper reaches of the Kauaeranga Valley. It was one of 9 dams which drove logs down to booms in the lower valley.

Of the many structures built by pioneer kauri bushmen including camps, shanties, log chutes, trestles and skid roads, the driving dams have proven the most durable, and are arguably the most distinctive and evocative of the industry as a whole. They were an essential part of the kauri industry for recovering logs in difficult back country.

The Dancing Camp dam is classified as a stringer dam because it was planked vertically, the boards being nailed directly into the stringers (major horizontal beams). Dams such as Dancing Camp were also known as flume dams because the floor and sides of the gateway were planked to prevent the bank and backlegs of the dam being washed away and to minimise log jams as the water surged through when the gate was tripped.

When Europeans first arrived in New Zealand kauri trees grew in abundance from the Kaimai Ranges to the far north covering some 1.2 million hectares.

Although Māori used kauri and kauri gum no significant impact on the resource occurred until the late 1700s when British vessels were sent to NZ to obtain spars for sailing ships.

By the 1830s, it was being sawn into boards for export and the local market. In 1903 340,000 cu metres was milled, approximately 40% of it being exported. Much of the timber used in the reconstruction of San Francisco after the 1905 earthquake and fire was kauri imported from New Zealand.

Kauri logging was New Zealand's first major land-based export industry (excluding whaling & sealing); consequently associated technologies such as the driving dams are an important historic element of one of our pioneer industries.

Ritchie, Neville A. 1995 An Account of Remedial Reconstruction & Timber Treatment on the Dancing camp Kauri Driving Dam in the Headwaters of the Kauaeranga Valley, Coromandel Peninsula. Dept of Conservation, Waikato Conservancy, Hamilton