So far, this summer has proved to be one of the hottest and driest on record. This may sound like good news for holiday makers relaxing at the beach, but it's certainly not for trout that need cool water rich in oxygen to survive.

Earlier monitoring had shown that the summer water temperature in Lake Otamangakau could exceed 20°C at the surface and oxygen concentration could fall below 5 parts per million (ppm) at the bottom of the lake.

These levels fall beyond the temperature and oxygen ranges preferred by brown and rainbow trout and are approaching lethal limits. Lethal temperatures for rainbow and brown trout are 25-26.5 and 23-26.4°C. Optimum temperatures for growth are 16.5-17.2 and 10-15.5°C. 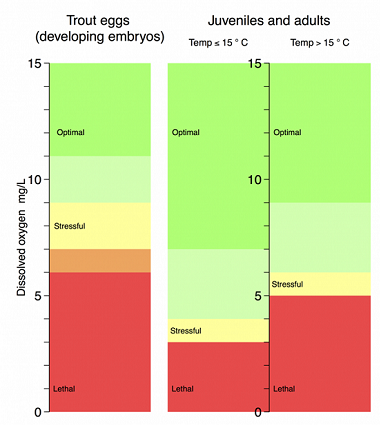 A dissolved oxygen concentration of 5.0-5.5 ppm can be tolerated by free-swimming brown trout but should be at least 80% saturation. The incipient lethal level of dissolved oxygen concentration for adult and juvenile brown and rainbow trout is around 3 ppm, or less depending on environmental conditions, especially temperature. The importance of the temperature is because cold water can contain far more oxygen than warm water (Fig.1).

These causes of environmental mortality also have an obvious added impact on catch-and-release mortality. Very few studies have been carried out to estimate the combined effect of natural and fishing related mortality on salmonids in water temperatures above 20°C.

The above pertains largely to retention fisheries, but the 1997 Anglers Guide produced by the Canadian Department of Fisheries and Oceans advocates that anglers should refrain from the practise of catch and release when water temperatures reach 18°C.

In absence of more detailed estimation water temperatures higher than 20°C and oxygen concentrations lower than 5 ppm are deemed as critical values for trout. 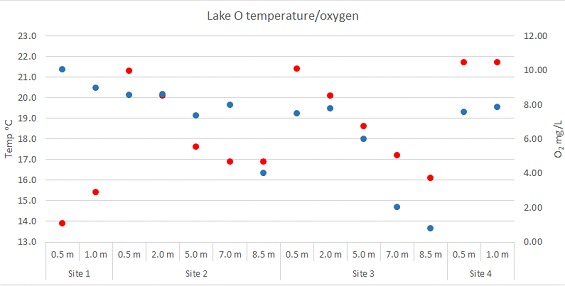 The oxygen concentrations were acceptable throughout the lake but below critical values in water deeper than 7m.

The combination of these conditions indicate that acceptable conditions of water temperature and oxygen concentration were available only in the water layer between 2 and 7m deep and are/were worse than in 1996-1997.

The exact impacts of this “squeezing” are not fully known but anecdotical reports of dead fish floating around the lake may be partly explained by the effects of marginal environmental conditions and/or poor catch-and-release survival.

The full effect of these combined causes of mortality will also depend on the duration that fish will have to endure. Therefore, we are now monitoring the water temperature and oxygen concentration throughout the summer and are planning to carry out catch-and-release mortality trials during different environmental conditions.