Located in Taupō area in the Central North Island region

Several times a day the gates at the Aratiatia dam are opened to release the full flow of the river - a spectacular sight from the lookout points. Stay safe and keep clear of the rapids at all times.

Keep clear of the rapids at all times

The track leading to the two lookout points begins 50 metres from the bridge on the true right of the river. Before the water was diverted to the power station in 1964, the Aratiatia Rapids were the largest in Australasia - the Waikato River dropping 28 metres in just one kilometre. Today their full potential can still be seen during the scheduled daily releases. Each release lasts 15 minutes.

The tiers of the rapids and steep walls of the gorge are remnants of an ancient volcano. It is said the the name "Aratiatia" comes from the meaning "stairway of Tia". Tia was a leader from the waka Te Arawa, and passed through the gorge with a small party on route to discovering Lake Taupō.

These are also the famous rapids used in the filming of the barrel escape scene in Peter Jackson's movie, The Hobbit: The Desolation of Smaug.

Walk or ride to Aratiatia Dam from Huka Falls by following the track that begins after the last viewing area over the falls. The track climbs onto the cliff tops with magnificent views of the river.

It then gradually descends and continues along the river through lovely bush cover as far as the SH1 bridge. After passing under the bridge, and climbing to a lookout over the Wairakei power station, the track opens out to grass and regenerating bush until you reach Aratiatia. Try to finish the walk when the spill gates are due to open.

Return via the same track or arrange transport from Aratiatia.

The Aratiatia Dam and Rapids are located on Aratiatia Road, off SH5 10 km north of Taupō.

Stay safe at the Aratiatia Rapids 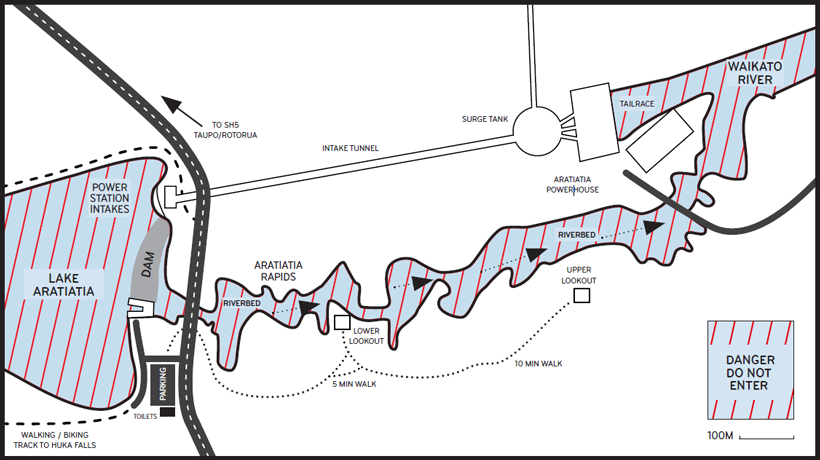 Stay out: Keep clear of the Aratiatia Rapids spillway and downstream area at all times. Never enter, swim or kayak in this area.

Be aware: Spills may happen at any time, even when there is no siren.