A historic cemetery on Mesopotamia Station in the headwaters of the Rangitata River holds the last resting place of Dr Andrew Sinclair, Colonial Secretary to the New Zealand Government.

A cemetery often tells a story more vividly than a book and the historic cemetery at Mestopotamia Station in the headwaters of the Rangitata River is no exception. Many of these stories are also tragedies.

A tragic end for Dr Sinclair 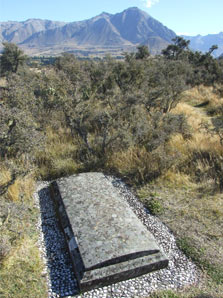 The first tragedy is nearly 150 years old and belongs with the oldest grave dated March 1861. This was only a few months after Samuel Butler (later to become famous as the author of  'Erewhon') established himself as a sheep-farmer. It is the final resting place of Dr Andrew Sinclair, Colonial Secretary to the New Zealand Government, who was admired more for his contributions to botany than to his “unremarkable” political career.

While accompanying his good friend Julius von Haast, Principal Geologist on a survey of the upper Rangitata, he drowned when their horse bolted while crossing the river. It was a sad blow to Haast.

“We brought the body of my lamented friend to Mesopotamia and buried him on March 29. Near the banks of the river, just where it emerges from the Alps, with their perpetual snowfields glistening in the sun, amidst veronicas and senecios and covered with celmisias and gentians, there lies his lonely grave. With almost juvenile alacrity he had climbed and searched the mountain sides, showing that notwithstanding his advanced age his love for his cherished science had supplied him with strength for his pursuits, until at last, over-rating his powers and not sufficiently aware of the treacherous nature of alpine torrents he fell a victim to his zeal. Great and deep was my sorrow, and with a saddened heart I had to continue alone the work upon which we had set out together.”

Haast commemorated his friend by naming Mount Sinclair, Sinclair Range and the Sinclair River after him. Their friendship has been remembered in the name of the mountain daisy Haastia sinclairii.

This first lonely grave has since been joined by others, some as recently as 2007.  There is another tragic tale to tell about the McKay grave beside Sinclair's. McKay, a worker at Anama Station, met his death one Sunday after he had been to see his sweetheart, a Boundary Keeper's daughter at Ross’s hut. While undoing his tethered horse, the horse took fright. McKay got a rope caught round his body and was dragged to his death (by having “his brains dashed out on the roadside” at “Ross’s cutting”.

History told in headstones at Mesopotamia

A walk around the cemetery reveals long family associations with a land “between the rivers” with the surnames Gifkins, Curtis and Prouting, and reminds you of the many lives connected to this dramatic high-country landscape.