Explore the remains of a World War II Heavy Anti-aircraft Artillery battery. The structures are much as they were when thy were decommissioned after the war.

Five concrete structures on the hilltop east of Tauhinukorokio/Mt Pleasant in Christchurch represent a command post and four gun positions. They are the remains of a World War II (1939-1945) Heavy Anti-aircraft Artillery (HAA) battery.

The structures are much as they were when they were decommissioned by the army after the war.

What was heavy anti-aircraft artillery used for? 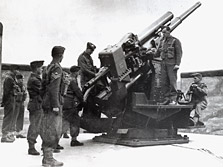 The command post housed instruments such as the spotter’s telescope, a height and range finder, and a predictor. The predictor combined information on the distance, course and speed of the enemy, to calculate where to train the guns and what fuse-setting to use for the shells. This information was automatically relayed to the gunlayers in each emplacement so all the guns were trained on the target. The trenches carrying the cables linking the gun positions to the command post are still clearly visible in the gun emplacements.

In the open centre of each gun emplacement is the holdfast (securing bolts) set in a concrete slab on which the gun was mounted. Around the gun were arrayed the ammunition lockers which no longer have their doors.

When was it built and why?

In early 1942 surveys were carried out with a view to establishing four fixed HAA batteries around Lyttelton Harbour. Quail Island was chosen as one of the sites.

As the threat of enemy attack receded only one HAA battery was built. This was on high ground above the port of Lyttelton.

Although the contract was allocated in November 1942, by August 1942 work had already begun. An access road was constructed, four guns mounted in the open and the hole for the command post was dug. Work on the battery and the camp where the gun crew and supporting staff were housed was completed in early 1943.

Because of the rocky terrain on the hilltop site, the gun emplacements were built above ground with only the command post excavated into the rock. This provided maximum protection for personnel and instruments. The work was carried out by a private contractor, with the contract supervised by the Public Works Department. The battery was manned from January 1943 to September 1944 but never went into action.

Why build these defences?

The HAA emplacements were built at a time when the war in the Pacific was finely balanced. There was a fear that the Japanese would take over the Pacific, including New Zealand.

Heavy losses were inflicted on Japanese naval forces at the Battle of Midway (3-6 June 1942) but the massive build-up of the United States armed forces, which would eventually prove decisive, was still getting under way. By early 1943, however, the capability of Japanese forces to attack distant targets had been severely curtailed.

How common are they?

Twenty-one HAA positions were built in New Zealand during World War II. Sixteen of these have been largely or completely destroyed. Five in Wellington, and this one at Mt Pleasant still survive, substantially intact.

Who manned the guns?

The guns were manned by about 50 men of the 83rd Heavy Anti-Aircraft Battery, New Zealand Army. Women from the Women’s Auxiliary Army Corps (WAAC’s) assisted by crewing the command post.

A gun crew consisted of 10-12 men and a similar number of people crewed the command post. Accommodation and other facilities were provided in the camp situated nearby.

You can park near Tapuwaeharuru/Evans Pass and follow the Crater Rim Walkway above Lyttelton Harbour and the Tauhinu-Korokio Reserve to the battery site.

Another route takes you up along an old army 4WD track across city council land. This track starts at a lookout point on the Summit Road, near its intersection with Mt Pleasant Rd.