The Adderley Head Signal Station was established in 1867 and operated until 1949. The building is currently closed to the public.

The station played an important role in maritime transport. In 2011 the building was badly damaged in the Christchurch earthquakes, and is closed to the public.

A Pilot and Signal Station was established here in 1867 and began operating on 8 December of that year under the charge of Mr Novis. 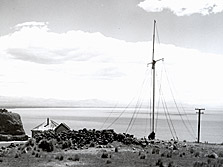 Adderley Head Signal Station, Godley Head, can be seen to the left of the station and the Southern Alps in the distance

Duties included keeping a four-hour watch (later extended to six hours) day and night, for approaching ships, acknowledging requests for a pilot and relaying shipping movements to the Time Ball Station at Offices Point above Lyttelton Township. Messages were sent by code flags flown from the flagstaff during the day and by carbide Morse lamp at night.

Communications with Lyttelton improved in 1877, with the introduction of a telegraph line and later a telephone system in 1880. This was the first submarine telephone service in New Zealand.

The signal station was closed at 1 am on 2 July 1949. The last signalman on duty was Charlie Gaunson, who took up duties in the replacement signal station tower built on Gladstone Pier.

The foundations of a second signal station built in 1937 remain. This building burnt down on 11 February 1967.