Located in the Auckland region

Te Matuku Marine Reserve protects one of Waiheke Island's largest and least disturbed estuaries, along with an area outside Te Matuku Bay in the Waiheke Channel.

Within Te Matuku Bay, the most rewarding activities are above the water. It's a great place for bird watching, kayaking or paddle boarding, because the water itself is shallow and muddy. A few bays are suitable for swimming. 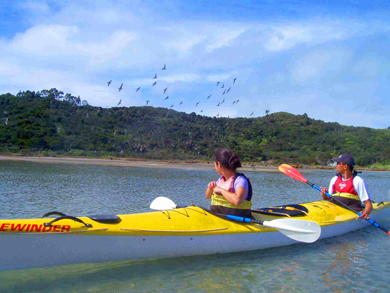 Te Matuku is a great place to bird watch while kayaking

A notable feature of the reserve are the spiny tubeworm (Pomatoceros caeruleus) colonies dotted over the intertidal flats. This species used to be abundant in the inner Waitemata Harbour but is now rare there.

Three small shell spits on the eastern side of Te Matuku Bay are roosting and nesting areas for native and migrant shorebirds. The bay is named after the now-rare Matuku - Australasian bittern – and these can sometimes be seen in the adjoining scenic reserve wetland.

Offshore, fine muds extend out into Tamaki Strait and around Passage Rock. The greatest depths in the reserve occur off Otakawhe Bay at the entrance to Waiheke Channel. Here strong tidal currents expose patches of shell that are colonised by sponges, anemones and soft corals. Juvenile snapper and trevally are abundant around the reefs. Rig (spotted dogfish) and flatfish are common in Te Matuku Bay.

The area is of historic interest, having been settled since pre-European times (Ngati Paoa), and there is a colonial settler cemetery above the bay.

There is a small oyster farm within the deeper waters of the reserve - this is technically not a part of the reserve, as it was a pre-existing business when the marine reserve was established.

The reserve is located at the far south-east corner of Waiheke Island in the Hauraki Gulf. It extends into Tamaki Strait and can be accessed by land and sea.

By land, access is best by car - there is no public transport on this part of Waiheke Island. The drive to the reserve takes about 25 minutes from Kennedy Point (the vehicle ferry wharf) via Orapiu Road, which skirts around Te Matuku Bay.

Once in the Orapiu area, take Anzac Road which joins Nepean Ave and leads down to Otakawhe Bay where there is parking available. Note that nearby Hunterville Road begins at Orapiu Wharf and ends at Otakawhe Bay. It is more like a gravel walking track than a road. 360 Discovery run a ferry service from Auckland city to Orapui Wharf on it's way to the Coromandel.

Otakawhe Bay is the eastern-most beach of the marine reserve. With easy access from the road it is the perfect place to launch kayaks, although be aware of the tidal currents that effect this bay.

The implementation of the reserve does not affect any persons right of ownership or lawful occupation of moorings and jetties within the reserve.

Navigation within the reserve is not restricted. Passage Rock is an important navigation aid and boats commonly pass between it and Te Matuku Bay through the marine reserve.

Care should be taken to avoid damaging marine life by dragging anchors.

Boaties should not allow their boats to rest on the tidal flats at low tide as this can damage fragile intertidal species, particularly the tubeworm colonies.

If exploring the bay and estuary, note that Te Matuku Bay is tidal and care must be taken to plan around the tides as areas dry out at low water. Mud towards the head of the bay is very soft and you can sink up to your waist in it.

There is a total fire ban on islands in the Hauraki Gulf. There are sometimes exceptions for Waiheke, Great Barrier, Kawau and Rakino which Auckland Council look after.

Estuaries are special places where rivers meet the sea. Each one is unique, ranging from small lagoons to extensive wetland harbour systems.