Rangitoto Island is known for its contrasting rugged lava terrain and abundant native plant life. It has the largest pōhutukawa forest in the world, and is a safe haven for endangered native birds.

Located in the Hauraki Gulf/Tīkapa Moana, Rangitoto is made up of two scenic reserves – Ngā Pona-toru-a-Peretū Scenic Reserve at the summit/tihi of the volcano; and Rangitoto Island Scenic Reserve covering the remainder of the island. It is joined to neighbouring Motutapu by a causeway built during WWII.

Rangitoto and Motutapu were declared pest-free in 2011 after a four-year eradication programme. Being pest-free has created a safe haven for precious native species such as the endangered saddleback, the melodious tūī, and the inquisitive kākā. It is vital these islands remain free of mammalian pests so our native species can continue to thrive.

To make sure you don't accidentally bring pests with you, find out what you need to do before visting pest free islands.

Restoring the island to its native beauty Rangitoto and Motutapu are pest-free as a result of one of the most complex island pest-eradication programmes in the world.

Pests were having a devastating impact on the islands' unique wildlife and plants. The project simultaneously removed seven mammalian pests - feral cats, rabbits, stoats, hedgehogs, Norway rats, ship rats, and mice from the islands. Possums and wallabies were eradicated from the islands in 1992. Pest eradication has enabled native plants to regenerate and create a natural habitat and food source for native species.

Today, as well and the ongoing day-to-day management of the island, DOC focuses on pest surveillance, weed eradication, and educating visitors about how to keep the islands pest-free. 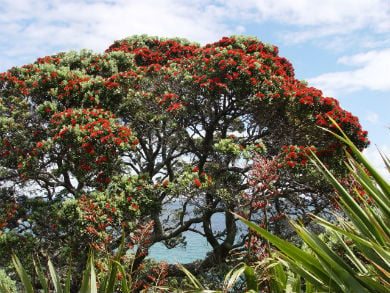 Rangitoto has the largest pohutukawa forest in the world

The restoration of Rangitoto and Motutapu protects the world's largest pōhutukawa forest. The islands provide a 3,800 hectare environment that supports New Zealand's most loved wildlife.

Following forest regeneration, native species previously not seen on the islands began to arrive on their own. These included kākāriki, bellbird as well as the cheeky kākā. Tūī numbers soared. Many other bird species now inhabit Rangitoto forest including fantail, grey warbler, silvereye and morepork (New Zealand’s only surviving native owl).

Other native animals unable to reach the islands on their own have been transferred, including saddleback and whitehead. The flightless native birds takahē and kiwi have been released on neighbouring Motutapu. Here they are less likely to migrate due to Rangitoto's volcanic scoria, and scarcity of water.

Today, as you climb through the forest, you are likely to hear the canary-like twitter of whitehead, the lively chatter of kākāriki, and the melodious call of saddleback. Once you reach the summit you might hear the distinctive "skraak" of the kākā, a large native parrot and strong flier that visits from the outer islands.

The shores of both islands are visited often by a variety of seabirds. There are two thriving nesting colonies of black-backed gulls – one near Rangitoto Wharf, and the other near the Beacon at McKenzie Bay.

The island is also home to six species of lizard, five of which are native. Copper and Suter’s skinks were known to exist on Rangitoto before pest-eradication. The Moko skink, common gecko and Pacific gecko were detected a few years after pest-eradication when their numbers increased to a detectable level. The plague skink (or rainbow skink) was introduced from Australia. It was declared a pest as it competes with our native lizard species for food, habitat and space.

Rangitoto's lava rock seems an inhospitable environment for plant life. Yet the island hosts more than 200 species of native trees and flowering plants; more than 40 kinds of fern; several species of orchid, and the largest pōhutukawa forest in the world. Many plants form unusual hybrids or adopt strange behaviours because of the lack of soil, and scorching hot conditions.

The crimson-flowered pōhutukawa is Rangitoto's dominant tree. Before pest-eradication efforts, possums had decimated the pōhutukawa forest on Rangitoto. The eradication of possums and wallabies in the 1990s enabled the forest to regenerate, and a major weed eradication programme continues to support the health of the island’s forest.

As they grow, the pōhutukawa provide shelter and shade for other species like mingimingi, koromiko and puka, forming ‘vegetation islands’. Gradually these 'islands' join up to form continuous vegetation.

Perching lilies, astelia and other epiphytes, which normally clamber over the high branches of trees, surprisingly grow like ground cover on Rangitoto. The epiphyte Kirk’s daisy, normally decimated on the mainland by possums, flourishes here.

In addition, the Northern rata has hybridised with the pohutukawa to form many different iterations.

There are also spectacular groves of kidney ferns. These are delicate and translucent on wet days, and crinkle up like potato crisps on hot days.

Rangitoto also features lush ravines and small gullies where soil has built up, as well as mangroves – many growing directly from the coastal lava.

Erupting from the sea more than 600 years ago, Rangitoto Island is one of the youngest land masses in the Hauraki Gulf/Tīkapa Moana.