The threat of the European wars did not escape New Zealand, despite our isolated geographic position. Rangitoto was considered a prime location for military operations as it sits between both channel approaches to Auckland Harbour.

There were plans to make Rangitoto part of Auckland’s defences as early as the beginning of the 1900s. The island’s lack of water and its volcanic nature meant careful planning was required and so it took until 1935 for recommendations to be taken up and tenders called for.

The tender was for a 6 inch gun battery on neighbouring Motutapu as well as associated structures on the summit of Rangitoto. This began military operations on Rangitoto, which continued until 1957 when activities of this nature were officially brought to an end.

Defence structures on the island formed three groups – the fire command post and associated buildings at the summit, a 12 pounder gun battery on the coast, and a controlled mine base at Islington Bay. 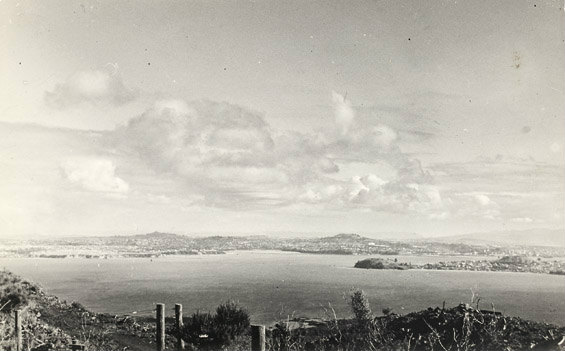 The view from Rangitoto summit, looking back towards Auckland, in the early 1940s

Seeing clearly from the summit

Rangitoto’s summit provided a premium elevated position and uninterrupted views, making it an ideal location for a fire command post. The post was built in 1938 and fitted out in 1941. Its purpose was to direct gun fire to any attacking warships from coastal defence batteries (guns) elsewhere. It was feared raiding warships might fire on Auckland’s port, naval dockyard and fuel tanks at the Western Reclamation (now known as Wynyard Quarter).

Other buildings on the summit included a fortress observation post, engine generator shed and wireless room, and later a RDF (radar) station. 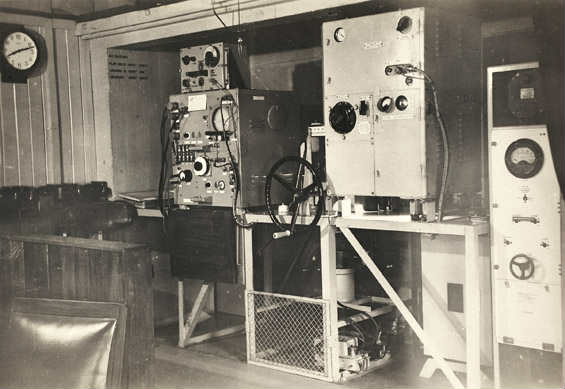 The interior of the radar room on Rangitoto summit

The fortress observation post was one of many across Auckland that could communicate target information to the fire command post and batteries. This information would be processed in plotting rooms and the range and bearing of the target would be transmitted automatically to the appropriate guns.

The fire command post was only operational on Rangitoto for a short time in 1944. Because of its isolated position and problems with water supply, the post was moved to nearby North Head on the mainland. As a result, military operations on Rangitoto were officially brought to an end in 1957.

What can you see of the military structures today?

The fire command post remains at the summit and the observation post and wireless room also remain.  These last two structures can be found on the loop track around the summit. Only concrete foundations remain of the engine generator shed and RDF station. There is plenty of information about the role Rangitoto played in military operations inside the fire command post.  Make sure you go and have a look when you next walk to the summit.

A camp to service the fire command post and observation posts was built below the summit of the northern slope, near the second crater. Thirteen mostly wooden buildings were constructed in the late 1930s.

Construction of the camp caused endless problems, mainly related to Rangitoto’s volcanic landscape and the lack of water. Several bores were drilled but adequate water was never found. Eventually the only way the water supply could be maintained was to transport it from Auckland, which was very expensive.

Other big expenses included rebuilding the existing roads and building a causeway between Rangitoto and Motutapu. The initial £2,000 budget for the Rangitoto military installations blew out to a grand total of £37,529 – a fortune compared to the £1,500 it cost to build an observation post and camp on neighbouring Tiritiri Matangi Island.

The upside of these expenses is that the roads and causeway remain today, making it easy to explore Rangitoto's volcanic landscape and to get across to Motutapu. 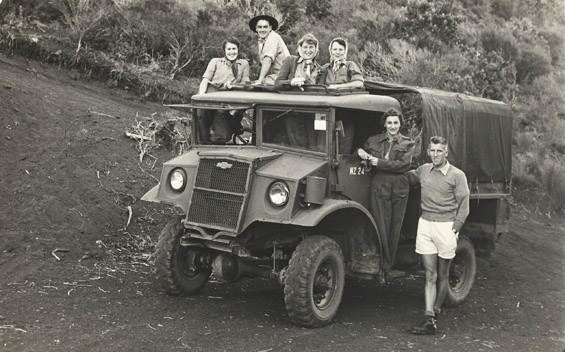 The truck which transported military personnel from Motutapu to Rangitoto summit

Work started on a 12 pounder gun battery on the coast facing the channel between Rangitoto and Motukorea/Browns Island in 1940. Two guns were test-fired in 1941.

The concrete remains of two gun emplacements and associated structures, along with retaining walls of Rangitoto stone and the remains of cable trenches can still be seen on the coast to the south of Islington Bay. 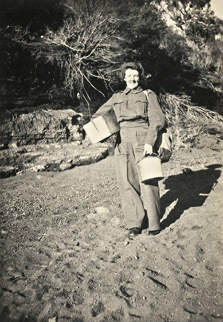 Madge's colleague, Kath Harris, at the beginning of the zig-zag track to the summit

Controlled mines were laid between Whangaparoa Peninsula and Tiritiri Matangi Island (the Whangaparoa Passage) in September 1942. These mines were designed to be detonated on command when a ship passed over them.

To service these mines, as well as controlled mines in Great Barrier Island harbours, a huge controlled mine base was built at Islington Bay. Completed in May 1943, it was made up of large sheds to house equipment, a wharf, powerhouse and a cable store.

When WWII ended, the minefields were removed and the controlled mine base was used for naval stores. The buildings were finally removed or demolished in the 1980s. The remains are closed to the public as they are unsafe to explore.

In the early 1940s, members of the Women’s Auxiliary Army Corp (WAACs) joined the war effort on Rangitoto. 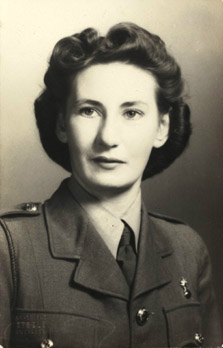 The WAACs were barracked at the newly extended camp on Motutapu. They were driven daily by army truck across the causeway to Rangitoto and dropped just below the summit. In their heavy woollen uniforms, weighed down by water and supplies, they walked the final distance to the summit up a steep zig-zag track across the scoria.

Once at the summit their job was to cover the night shift in the radar station while the men slept. Throughout the night, the WAACs monitored ship movements in the channel between Tiritiri Matangi Island and Whangaparoa Peninsula. If they detected a vessel that didn’t exactly match the records for expected boat movements, the alert would go out.

It was a revolutionary time for these young women, often leaving the smothering clutches of 1940s family life.

One WAAC who served on Rangitoto, Madge Redwood, recalls the secrecy surrounding the work they did and how it justified her ‘escape’ to freedom. When her dad wanted her to come back home to Hamilton after her initial training, he was told she was too important to the war effort. So he missed out, much to Madge’s relief!

(Thanks to Madge Redwood for the use of her photos).