How DOC is managing the wilding tree problem in the Mackenzie basin and upper Waitaki valley. 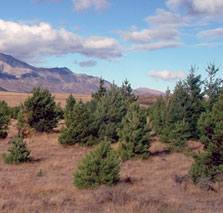 What is a wilding tree?

The term ‘wilding tree’ is given to trees that spring up in places, usually in large numbers, where they are not wanted. In the Mackenzie basin and upper Waitaki valley, as in other areas, wilding conifer trees are a major problem. The worst offenders are:

Other wilding trees that are a problem on public conservation land in the region include rowan, elder, silver birch, elderberry, willow and cherry.

How did wilding conifers get here?

Pinus contorta is a native tree of North America and was introduced to New Zealand in 1880. In the 1950s, introduced pests such as rabbits, goats and deer were thought to be causing increased erosion on the loose scree fans in New Zealand’s high country. Hardy conifer trees were planted on these slopes to stop further erosion. However, it is now known that erosion of our mountains is a natural process caused by geological uplift and harsh weather.

Trees were planted for erosion control in the Mackenzie basin and upper Waitaki valley at places like Irishman and Stony streams in the Ben Ohau Range (near Twizel) and the Kirkliston Range (near Kurow). Trees were also planted to ‘enhance’ the landscape and beautify picnic areas, e.g. Lake Pukaki foreshore and Benmore dam. Shelter plantings were established for protection against harsh winds, e.g. at Lake Ohau Lodge.

Wilding pines have spread from these early plantings and have become a problem in adjacent areas.

Why are wilding conifers a problem?

Once they spread, wilding trees can grow in thick, dense infestations and so close together that it is difficult to walk between them. They grow extremely fast – much faster than our slow-growing native trees like beech/tawhai and tōtara. Blankets of conifer needles cover the ground and suppress the native tussock landscape. Native species that rely on the tussock landscape to survive – such as beetles, butterflies, moths, spiders, grasshoppers, wētā and lizards – lose their habitat.

Areas of native bush and beech forest cannot compete with the fast-growing conifers. Plants such as mountain flax, coprosma, muehlenbeckia and kōwhai, which provide berries and nectar for native birds, become displaced. Water is a precious resource and wilding trees can draw large quantities of groundwater, which has downstream impacts.

Research in the Mackenzie basin has shown that the conversion of tussock grasslands to tree plantations or wilding forests could result in 25–30% less water reaching streams and lakes. This would have a huge effect on native fish and invertebrate populations in streams, and a loss of recreational opportunities such as fishing and boating.

Towns such as Twizel rely on groundwater for domestic water supply. Some people argue that wilding trees are a good carbon sink—they soak up harmful carbon emission – and should not be removed. However the native tussock grasslands and shrublands they are displacing are also a good carbon sink.

Farmers and land owners also lose productive land when trees displace pasture used to feed stock. Aesthetically, wilding trees change our landscape. Places like the Lindis Pass Conservation Area and Ben Ohau Range are well-known for their open tops and tussock-clad slopes. These special features are threatened by hardy wilding trees which can establish up to 2,000 m above sea level.

How are they controlled?

A number of methods are used to control wilding trees. Hand-weeding is labour intensive but suitable for areas of low infestation. Young trees can be pulled or dug out of the ground. Larger trees can be cut off at the base with a pair of loppers but every green needle has to be removed otherwise they can re-establish themselves.

Contract forestry gangs, hired by DOC for control work, use scrub-saws or clearing saws for trees with small to medium-sized trunks on grass and tussock areas. This tool is similar to a domestic weed-eater but with a saw blade at the end which swiftly cuts through tree trunks. Chainsaws are used on mature trees. Experienced crews drive to the infestation site and then walk to each tree. In remote locations or on very steep hillsides, crews are dropped off by helicopter (skid-hopping) then picked up and moved on to other sites.

A new basal bark control method is now being used on trees, where a small amount of herbicide is applied to the bark. This method is quick but it does take a while for the tree to die, which are left standing. It also reduces the risk to any native plants growing near the tree. This chemical can also be applied to cut stumps, which prevents poorly-cut stumps from re-growing. Basal bark treatment can also be carried out by helicopter with a hand-held wand used from the passenger seat to apply herbicide onto the bark of trees from above. This method has replaced skid-hopping in most steep areas in the Mackenzie basin.

If wilding pine infestations are too large and dense, and therefore too expensive to control, they can just be ‘contained’. This is where the infestation is left but any spread from the main source is reduced by creating a ‘ring of death’ where a thick border of trees around the outside are killed with herbicide and left standing. This significantly reduces any seed spread from the trees within the stand. In dense (closed canopy) areas where trees are felled, they are left to rot into the ground. This helps suppress any new seedling growth in the area. In the dry Mackenzie climate it only takes a few years for the trees to become brittle and start to break down into the soil.

Who manages the spread?

DOC is responsible for wilding tree infestations on public conservation land. Other government agencies such as Environment Canterbury (ECan) and Land Information New Zealand (LINZ) are responsible for some areas in the basin. These agencies are increasingly working together and taking a collaborative approach to the problem of wilding trees enabling more effective and efficient control.

On high-country stations it is up to the individual farmer to control the spread of wilding trees.

Concerned residents in some areas are taking action into their own hands. The Ohau Conservation Trust is one such group that is working to keep the Lake Ohau landscape in its natural state. It has been estimated that it would cost $16 million over 16 years to clear wilding conifers from public and private land in the Mackenzie basin and upper Waitaki valley.

Are there commercial uses for wilding pines?

These trees are no good for timber as the branches grow too close together and they have not been maintained for this purpose. They are also difficult to retrieve as most wilding trees are a long way from roads.

Experiments using timber for tanalised posts have been undertaken but the posts were not strong enough and did not absorb the tanalith very well.

Wilding trees grow very quickly so the timber is not dense and hard like macrocarpa. Use of wilding trees for bio-fuel has been investigated but the technology is not ready yet. The distance of trees from roads for retrieving mulch or timber is also a problem.

Maintaining wilding trees as part of the Emissions Trading Scheme (ETS) has been considered by some farm stations. However, the cost of spread from wilding conifers is often greater than the funds gained as part of the scheme. Currently legislation is being reviewed and an outcome may be to prohibit Pinus contorta from being used in this scheme.

What can you do?

Some trampers and hunters carry little folding saws to cut down small wilding trees found on the tussock hillsides. If you are doing this, it is very important to cut down the whole tree stump and not leave any branches or green needles behind. Extremely small seedlings can be pulled out by hand which is very effective as there is no risk of re-growth.

Wilding conifers are invasive weeds that threaten to permanently alter the unique landscapes that are only found in New Zealand.