Locate your nearest whio, and find out about whio security and recovery sites.

Security sites are high priority sites which are intensively managed to secure representative populations of whio. At each of theses sites the goal is to have 50 pairs of whio. Four of these sites are in the North Island and four are in the South Island. 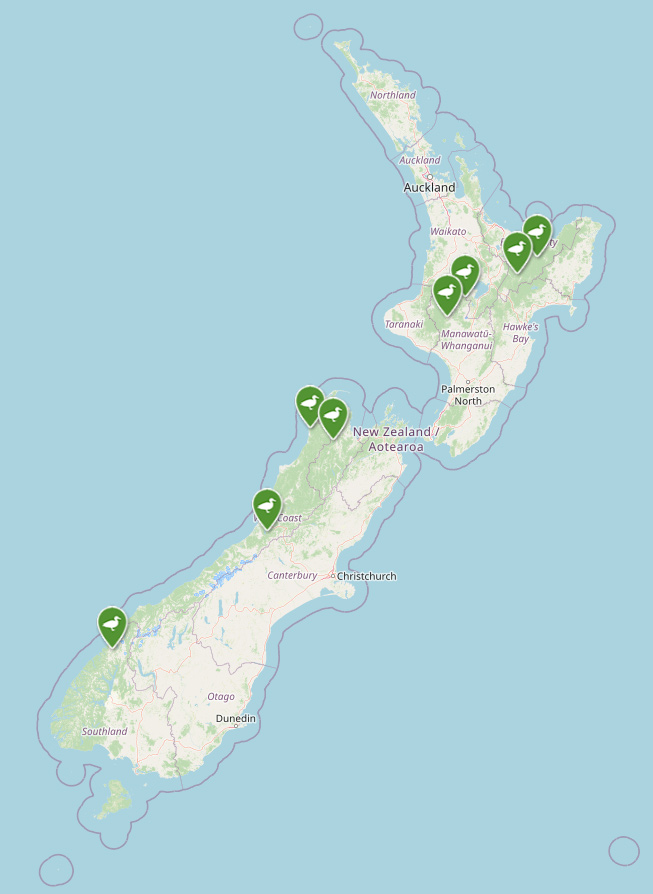 The Te Urewera Mainland Island (TUMI) is New Zealand's largest mainland island and is an area of very high biodiversity. Its home to various native bird protection projects and includes a successful whio security site. However, with threats like stoats and changing water levels, whio remain vulnerable in this area. The Te Waiti River has been a designated monitoring area for seven years and has a population of around 20 whio mating pairs.

Whirinaki Forest Park is a 55,000 hectare indigenous rainforest best known for its awe-inspiring giant trees. The forest is home to a designated whio security site that uses lines of DOC 200 traps to lessen the threat from predators in the area.

The 20,000 hectare Tongariro Forest is bordered by three main rivers; Whakapapa, Wanganui and the Magatepopo, all of which hold high numbers of whio. The whio in this area are protected by trapping along the rivers, as well as aerial 1080 drops every five years. The birds are also micro-chipped for accurate monitoring. There are 46 whio pairs living within the Tongariro Forest security sites.

Over 50km of the Manganui o te Ao and Retaruke rivers have been protected from predators specifically for the whio. There are now approximately 50 pairs of whio within the security area and improved rates of breeding means there are chicks in the rivers over summer. In the last breeding season there were more than 50 chicks bred in the area. Other birds have also benefited from the secure area with reported population increases for a range of species.

Located in the Kahurangi National Park, the Oparara River once supported a significant Whio population. This fact makes it an obvious choice for a security region. There’s 42km of trap lines along the Oparara Valley targeting stoats. DOC rangers monitor the breeding success of whio in this area by tracking females and checking nests regularly. Further trap lines are being established in neighbouring catchments so that the site will be capable of protecting 50 whio pairs by 2014.

The Wangapeka and Fyfe river catchments are situated within 30,000 hectares of beech forest. When the Whio programme began on the Wangapeka’s Rolling River in 2003, just three whio lived there. By 2010 there were 65 whio on the river (16 pairs, five single ducks and 28 ducklings). This Whio population is protected by over 1000 traps that target stoats and rats.

Styx and the Arahura rivers

The Styx and the Arahura are adjacent river catchments in the Hokitika area and home to a whio security area. Trapping for stoats and rats began in 2004 and has helped the whio population grow to 18 pairs. This catchment area also contributes whio eggs to the Whio Operation Nest Egg project where whio eggs are incubated and reared in captivity before being released to explore their destiny in the wild.

This whio security site lies within the northern section of the Fiordland National Park and contains one of the more robust populations of whio in the South Island. Stoat control is targeted towards whio recovery, but other native species also benefit like the kaka, weka, kiwi and robin. In 2011 the protected river systems had 44 adult whio pairs, 78 ducklings and 77 juvenile ducks. The total number of adult whio pairs continues to grow towards the 50 pair target.

Recovery Sites are sites that help to maintain whio across their natural range. These sites are maintained through community efforts and DOC initiatives. 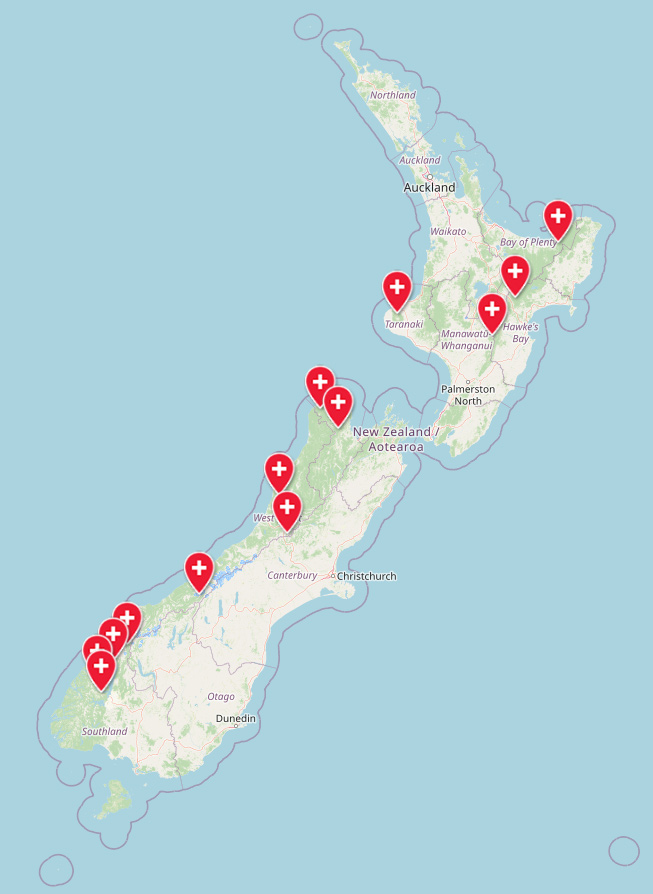 The 22km long Takaputahi River has its origins in numerous streams which rise in rough hill country close to the eastern end of the Bay of Plenty, the longest of which is the Rawea Stream. The Takaputahi flows mostly east, away from the coast, before meeting the Motu River. Much of the river is within the Raukumara Forest Park. In 2007 five whio mating pairs were recorded.

Pohokura is a red beech forest with 120km of walking tracks and eight huts. Whio breeding has been documented in several sites within the forest and the birds are protected by the periodic spread of 1080 poison to limit predator numbers. The goal is to provide a safe haven where whio can survive and expand into the surrounding public and private land.

Egmont National Park is a mountainous area that encompasses three volcanic cones with Mount Taranaki forming the nucleus of the park. Twenty eight native bird species and 15 introduced species can be found in the park. Threatened species include the whio, brown kiwi, and the fernbird. The whio were reintroduced to the park and ongoing translocations occur to ensure successful establishment of the population. Predator trap lines in the park are checked 18 times a year and this has helped the whio achieve successful breeding in the area.

The Te Potae Project is an integrated pest management area of 20,000ha in the north west corner of the Ruahine Ranges. This area supports a diverse range of rare and threatened plant and animal species including the whio. Populations of whio are dispersed through the area and receive predator protection from 50km of trap lines that are checked monthly by DOC staff and volunteers.

Gouland Downs is in the Kahurangi National Park and is accessible through the popular Heaphy Track. The Blue Duck Project in the area aims to reduce predators around the nesting and living areas of the whio.

A small group of dedicated volunteers maintain a 23km trapline along the Moonlight and Croesus walking tracks to protect a very small population of whio in this scenic area. The objective is to re-establish a blue duck population on rivers in the South Paparoa Range. To help reach this goal, whio eggs are harvested and taken to Peacock Springs for captive rearing. Once the ducklings have reached fledgling age they are released back into Moonlight or Blackball creeks.

Situated in the Arthurs Pass National Park the Mingha and Deception Valleys are home to a small whio population. Whio numbers have dramatically increased since a 2004 survey that found only three blue ducks left in the area. Whio in Mingha/Deception Valleys are protected by monitored stoat traps and have front row seats at the annual Coast to Coast multi-sport event.

A popular spot for white-water rafting, the Landsborough Valley is also home to a number of endangered bird species including the whio and the mohua (Yellowhead). As an Operation Ark site the primary method for whio protection is stoat control by trapping and 1080 poisoning. Whio populations are also being supplemented by Operation Nest Egg techniques.

This site runs from the Hollyford Road end to the Homer Tunnel. The trapping is managed by a combination of Downers EDI, Gunns Camp Charitable Trust and the NZ Alpine Club. This protects approximately 28km of river. Currently 8km of this river is monitored and the area holds 5 pairs.

The trapping in this recovery site is managed by the Fiordland Wapiti Foundation. The trapping when completed will protect approximately 20km of river. This is still in the process of being completed. Currently there are around 7 pairs in this area. Historically this was a stronghold for whio in Fiordland.

The Murchison Mountains covers an area of approximately 50,000ha. A trapping network has been established for the protection of takahe. It also helps with the protection of a number of other species including whio, kiwi, mohua, kea and rock wren. At present this area holds around 20 pairs of whio. It has the capacity to hold around 50 pairs of whio at full capacity. Mitre 10 are in partnership with DOC to support Takahe Recovery and part of this is assisting with the cost of trapping. Whio Forever funding goes towards an extra trap check, trap line maintenance and whio monitoring.

The traps down the Iris Burn are managed by the Kepler Challenge Committee. There are four pairs of whio on this river. The trapping protects approximately 16km of river.

Rearing facilities are sites that help to maintain whio across their natural range. These sites are maintained through community efforts and DOC initiatives. 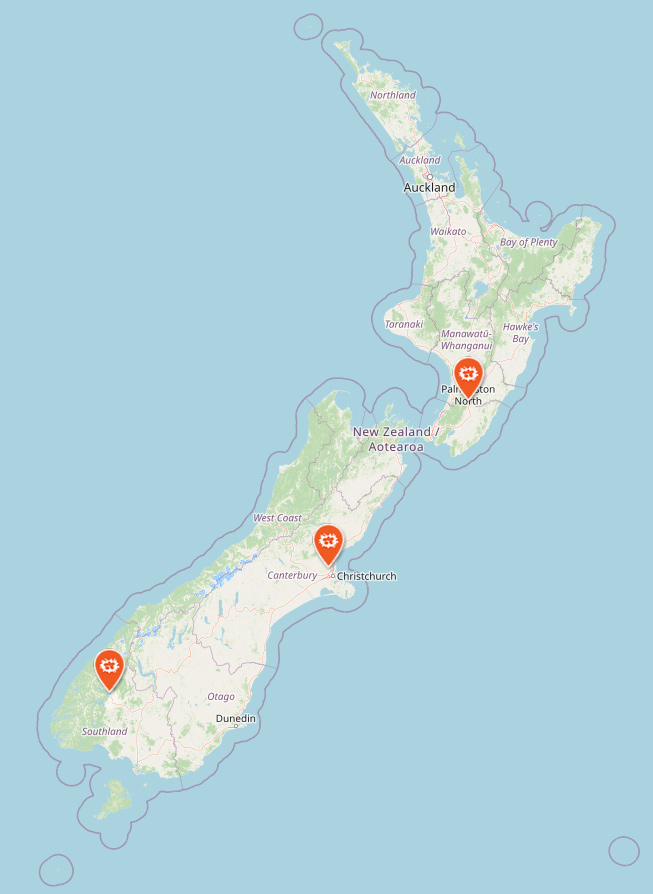 The Pūkaha National Wildlife Centre is located north of Masterton in a protected forest area. The centre and the surrounding forest are home to endangered bird species. Staff at the centre are committed to helping restore wildlife and native birds including the whio. Pūkaha National Wildlife Centre is also home to a successful whio captive breeding programme.

Funded by the Isaac Wildlife Trust, the Peacock Springs facility receives whio eggs from around the country and incubates them. Once the chicks have hatched they are reared in an aviary where they learn rivercraft and food hunting skills. The aviary has a specially built whitewater hazard course. After 3 months the young Whio graduate from this boot camp and are released back into the wild.

The Te Anau Wildlife Centre offers visitors an opportunity to see many rare birds from the Fiordland region in one convenient location. Native waterfowl, weka, parakeets, tui, kea and kaka can be all be viewed. It’s also a part-time facility for incubating and rearing whio. In 2005/6 twelve ducklings were reared to release and thirteen ducklings in 2009/10.

There are a number of places where you can see captive whio. These places are involved in whio breeding. 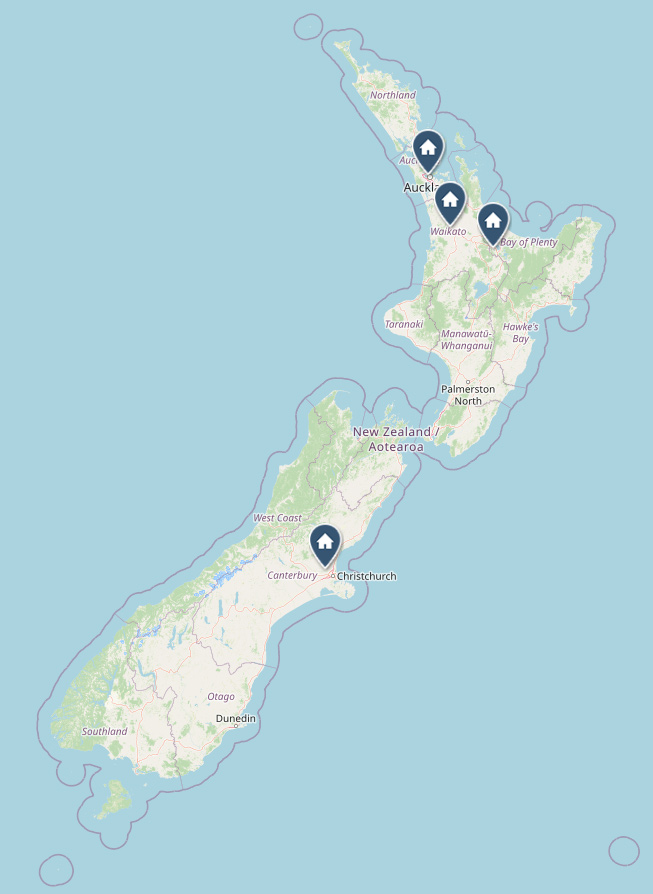 Auckland Zoo is one of the easiest places to get up close to a whio with a designated enclosure for the blue duck. There’s two breeding pairs at the zoo, five chicks and more chicks are expected soon.

Hamilton Zoo has a successful track record of breeding whio and releasing them into the wild. It’s a great place to check out the whio and a wide range of other native birds.

While not official residents of the Paradise Valley Springs Wildlife Park, local whio visit the open-plan park regularly. There is a special wetlands area in the park with walkways that bring you up close to a variety of waterfowl birds. There are no guarantees that whio will be hanging out when you’re there, but you just never know your luck.

Situated near Christchurch, Orana Park has a successful breeding programme for the Whio which has seen many ducks raised in captivity and released back into the wild. Orana Park has some great facilities and a wide range of native and exotic animals to view.