In 25 years long-tailed bats have turned from decreasing at 5% to increasing by 4% per year.

Bats or pekapeka are New Zealand's only native land mammals.

Long-tailed bats are found in more places than short-tailed bats. But both species are at risk.

They roost and raise their young in tree cavities where rats, stoats, possums and cats prey on them.

We can’t move bats to pest-free sites. So, without pest control they are likely to become extinct.

We’ve controlled pests in the Eglinton valley in Fiordland since the late 1990s.

A mix of traps and poison bait stations has kept pests down. Aerial 1080 was used for the first time in 2014 and since to combat rat plagues when the beech forest masts (seeds).

In 25 years of monitoring, the long-tailed bat population has turned around from decreasing at 5% to increasing by 4% per year.

Numbers of the rare southern short-tailed bat in the Eglinton valley are also on the rise. The Eglinton has one of only two populations of short-tailed bats on mainland South Island, with the other in the Murchison Mountains, although they are also found on pest-free Codfish Island / Whenua Hou.

Short-tailed bats in the Eglinton valley have done really well since predator control began in the late 1990s with the population increasing on average by eight percent per year.

As a result, the status of this species moved from ‘threatened’ to ‘recovering’ in the review of the threat classification of New Zealand bats in March 2018.

Our researchers counted a record 2,947 bats flying from a single roost tree in January 2018.

Maximum number of short-tailed bats leaving a roost each year in the Eglinton valley, Fiordland 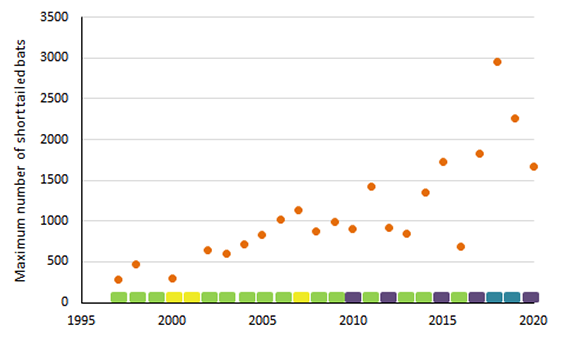 Maximum number of short-tailed bats by adding counts from different roosts from the same night. Green bars show no mast, yellow is an unmanaged mast, purple is a managed mast and blue is managed but no mast.

The graph indicates the population is growing. It does not show the actual size of the short-tail bat population as not all roosts are monitored.