DOC is protecting the blue duck/whio in the Maruia Valley.

The blue duck/whio is a river bird and is endemic to New Zealand. Numbers have declined drastically due to predation and loss of habitat.

In the upper Maruia Valley the Department of Conservation (DOC) has a strong integrated species protection programme which helps to protect this endangered bird.

Whio were rediscovered in the Maruia Valley in 2003 in the Pell Stream, not far from the Lake Daniell Track. A DOC ranger walked down the stream during the evening and found 1 pair (male & female). This was very positive news and since 2009 numbers have increased to a total of 5 birds. This shows that there has been successful breeding in the area, with the help of predator control.

In February 2013 Te Maruia Waka Huia species protection programme took a step forward with the release of four whio in the Alfred River, near the Lake Daniell track. The birds were released with transmitters and will be checked daily for the first two weeks and monthly thereafter. The Alfred River was chosen as this is a separate catchment area to the existing populations and it is also within the protected area. The whio are expected to breed within a year and will hopefully develop a sustainable population base in the future. 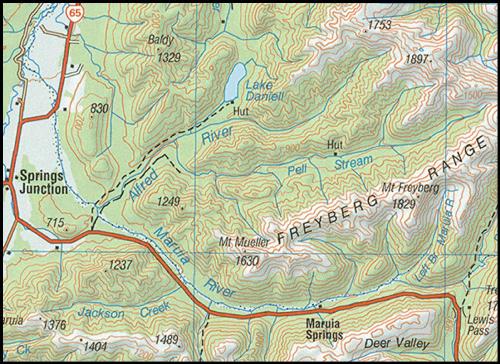 This is a great walk for families with young children or those people new to tramping. The track is a well formed bench track that can also be completed as a day walk.

This integrated species protection programme operates in the beech forests that line the Maruia Valley.