Burwood Takahē Centre is not open to the public.

Burwood Takahē Breeding Centre has been central to the Takahē Recovery Programme since 1985.

The centre is all about providing the best conditions for takahē to breed and rear their chicks.

The years of hand-rearing using puppets and models 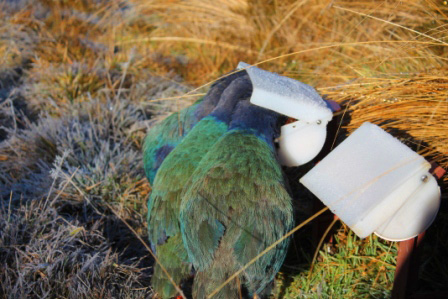 Feeding time in winter is eagerly awaited by the takahē
Image: H Dodson

The Burwood Takahē Breeding Centre was purpose built in 1985 as an incubation and hand rearing facility and is famous for historically using puppets and models to rear takahē chicks.

The tussock reserve provides similar conditions to the home of wild takahē in Fiordland. It holds similar food plants, including tussocks and sedges.

Moving away from intensive hand-rearing

These days, life at Burwood is quite different. Instead of only 6 pairs of takahē, there are now 20–23 pairs of breeding birds. Eggs are left on the nest rather than placed in artificial incubators and chicks are left to be reared by adult takahē as opposed to models and puppets.

Takahē are housed in 1.5–2 hectare enclosures and the productivity of the birds is maximised through supplementary feeding, nest manipulation and genetic management.

In the wild takahē territories can vary from 5 to 60 hectares dependant on the quality of the habitat and the time of year. To protect the vegetation in the pens and to ensure sufficient nutritious food is available, takahē are fed special takahe pellets. These pellets were developed for takahē by Massey University. 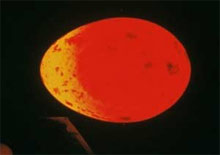 Nest manipulation is about moving eggs between takahē nests to rear as many good quality chicks as possible each season.

Takahē usually lay two eggs per clutch and if the nest fails or the eggs are removed they will renest, sometimes twice in a season.

Rangers locate and check every nest at Burwood.

Eggs are candled to see if they are fertile and to determine the age of the embryo. Candling eggs involves shining a light through the egg so that development of the embryo is visible.

Any infertile eggs are removed and either replaced with fertile eggs from another nest or the nest is removed, encouraging the birds to begin re-nesting.

Some birds are genetically more valuable to Takahē Recovery due to how little their genes are represented in the population. Any fertile eggs these birds produce early in the season will be removed to another nest encouraging them to renest.

Young takahē destined for release into the Murchison Mountains must spend some time in their first winter learning to grub for the rhizomes of summer green fern Hypolepis millefolium. This is so they can find food when winter snows force them out of subalpine tussock down into the forest.

While takahē instinctively know to grub for food, they do not seem to recognise the underground rhizomes of the fern as food unless taught to find them by other takahē.

At Burwood, the top pen includes beech forest with areas of summer green fern. These small areas of fern are fenced off and small groups of young birds are put into the pens with a pair of older birds for just a few days to learn the essential survival skills.