DOC has run an annual research programme looking at the productivity and biology of the New Zealand sea lion (previously known as the Hooker's sea lion) ince 1994/95. 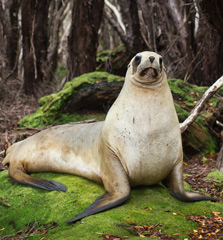 With nearly 80% of all sea lion breeding occurring on the Auckland Islands it is crucial for DOC to understand and monitor this population.

The largest colony in the Auckland Island group is tiny Dundas Island, off the east coast of the Auckland Islands. Currently about 1200 pups are born here, although this number has decreased from over 2000 pups per year 15 years ago.

Enderby Island is the second largest breeding colony in the Auckland Islands, currently with about 300-400 pups born there each year.

The species also breeds on Figure of Eight Island and on Campbell Island, where numbers appear to be increasing slowly. Three to five pups a year are born on the NZ mainland, primarily on the Otago peninsula.

DOC’s research has been investigating the productivity, survival and foraging behaviours of the New Zealand sea lion. This work has included annual pup counts at all breeding sites on the Auckland Islands, tagging all pups born on Enderby, and a sample on Dundas to facilitate monitoring of how many return each year.

This data is used to estimate survival and reproductive rates for the population. Satellite transmitters and time depth recorders are used to find out where the mothers go to feed and how pups and teenagers learn how and where to feed. Biopsy samples are taken to look at nutrient levels, as this may change with changes in diet.

As adults are constantly coming and going it is difficult to establish what proportion are present on land at any given time thus recording the net pup production in a given year is regarded as the best way of assessing seal population’s status and size.

Since annual monitoring started in the mid-1990s New Zealand sea lions have shown an overall decline of 40% in pup production. Possible reasons for this decline include fisheries interactions (both direct and indirect e.g. competition for food resources) and the outbreak of diseases with major epidemics in 1997/98, 2001/02 and 2002/03.

Results from the satellite tracking component of this research have shown that all sea lions venture much further out offshore from the coast than the 12 nm that are currently protected by the marine mammal sanctuary and marine reserve, and that foraging areas overlap with fishing effort, particularly squid trawling. The death of sea lions as bycatch has been recorded in several fisheries, particularly the squid and scampi trawl fisheries around the Auckland Islands.

DOC’s Conservation Services Program works together with the fishing industry to monitor fisheries bycatch of sea lions and the development of methods to mitigate this threat. This programme is funded through fishing industry levies and aims to provide the information needed in order to decrease fisheries long term impact on the species.

New Zealand sea lions are one of the rarest sea lion species in the world and are only found in New Zealand.