Donations from trampers on the Routeburn Track have enabled the set up of over 652 trap boxes in the area to help protect native species. 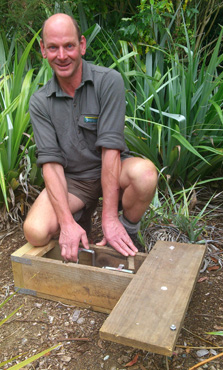 The project aims to protect and enhance the biodiversity of the Routeburn area by controlling introduced predators. This will give some security to the vulnerable native species that live near the Routeburn Track, such as kākā, kea, kākāriki and rock wren/tuke.

Evan Smith, a passionate conservation and hut ranger at Lake Mackenzie Hut on the Routeburn Track, started this project in March 2012. Evan had noticed a decline in the number of birds along the track and decided to do something about it. He put out a few stoat traps and began educating trampers on the danger stoats pose to New Zealand’s native wildlife.

Evan’s passion and personal commitment to the project has inspired over 2,000 concerned trampers to support the project and sponsor additional stoat traps to protect the area.

This project also supports the work being done by the Routeburn Dart Wildlife Trust in the adjacent Routeburn-Dart area.

How to get involved

Without public support and the help of donations, conservation projects like this are not always possible. DOC has partnered with New Zealand Nature Fund to manage donations for this special project.

Donate to the Routeburn Project

"My family and I enjoyed walking tramping the Routeburn in January, and one of the highlights of the trip was listening to ranger Evan Smith in the evening. Evan's passion and dedication toward the Routeburn Trap Project was quite apparent, and this passion was certainly contagious amongst the trampers in the hut that night. We were all so inspired after listening to Evan's presentation." Johan Verhagen (supporter).

From November to April, weave through meadows, reflective tarns and alpine gardens, and be rewarded with spectacular vistas over vast mountain ranges and valleys. From May to October, it can be cold and wet, with ice, snow and short daylight hours - only attempt if you have alpine, navigation and river crossing skills.