Following the successful eradication of mice from Antipodes Island, DOC and Ngāi Tahu have completed an investigation into the feasibility of eradicating pigs, cats and mice from Auckland Island in the New Zealand subantarctic region.

The Maukahuka project hopes to make the island pest-free. This would enable 514+ species to thrive with over 46 000 ha additional protected habitat.

The report on the technical feasibility of the project has been published.

We have a vision of New Zealand's subantarctic islands area thriving, free of mammalian pests.

Why aren't the islands thriving?

Feral pigs, cats and mice have inflicted severe ecological damage over the past 150–200 years.

What will the Maukahuka project do to help

The Maukahuka project proposes to eradicate pigs, cats and mice from Auckland Island. This is to help native flora and fauna to recover and thrive so it can be preserved.

The project is a huge challenge. Mice and pigs have never been eradicated on an island anywhere near this large, and eradication of cats have only been attempted on one larger island, in Western Australia.

The objectives are aligned with the Predator Free 2050 initiative.

How removing pests supports the island

Removal of all introduced mammalian pests from the islands will:

Will the project work 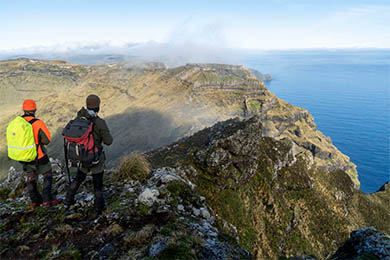 Looking along the western cliffs of Auckland Island. The rugged terrain is just one of the many challenges facing the project
Image: Finlay Cox | DOC

To remove all pest from the island as the project proposes is a large and complex task. Before committing to the eradication, a feasibility study was required to answer three key questions:

After four years of work, the results from this feasibility phase have been published in the Maukahuka Pest Free Auckland Island Technical Feasibility Study Report (2021). This report has been reviewed by DOC’s internationally renowned Island Eradication Advisory Group.

This report builds on field trials carried out both on Auckland Island and mainland New Zealand. Key findings from the report are:

View the Maukahuka project factsheets from May 2019 as web pages and downloadable factsheets.

The Maukahuka project was paused in April 2020 due to the financial impacts of Covid-19. The project team have completed operational planning to allow the project to restart quickly when conditions allow.

Auckland Island is approximately 43 km long at its longest point, 27 km wide and has a coastal perimeter of 374 km. The terrain is typically mountainous with peaks up to 650 m high. Its western side is dominated by formidable cliffs up to 400 m high carved by the pounding seas. The eastern side is a series of deeply incised cirques and glacial fiords, which are considerably more sheltered than the west. Two large harbours, Port Ross at the northern end, and Carnley Harbour in the south, and some of the narrow inlets on the eastern side, usually offer sheltered anchorage.

Infrastructure is limited to a Smith Harbour base camp which can accommodate seven people, an old six bunk hut at Deas Head and several derelict historic structures. The climate is persistently wet, cold and windy.

View a map of the Auckland Islands.

Read updates on the work of the Maukahuka: Pest Free Auckland Island project.

Predator Free 2050 is working towards an Aotearoa where our native species are safe from extinction and thrive alongside us – and everyone has a role to play.