The early timber industry exploited the massive kauri that dominated Northland forests but it was not until the first half of the 19th century that a widespread industry developed.

The early timber industry exploited the massive kauri that dominated Northland forests. Du Frezne's crewmen were the first Europeans to fell these trees in 1772 but it was not until the first half of the 19th century that a widespread industry developed. Kauri was extracted from every major forest in the region and as early as 1859 these were described by Hockstetter as being "ransacked and ravaged with fire and sword" (Reed 1953). It was almost a century later, in 1952, that the last large area of primary forest was given permanent protection in the Waipoua Forest Sanctuary. 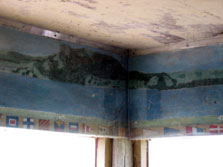 Kauri was also the basis for the gum trade and ship-building. Kauri gum was mostly dug from ancient buried forests, found over large tracts of Northland, but was also acquired by bleeding the living trees. The last extensively worked gum field was on the bleak Ahipara Plateau where Dalmatians created a vast network of trenches and sluicing channels that unfortunately provided them with little profit. In contrast shipbuilding was largely confined to the Hokianga and Whangaroa Harbours where kauri was still available near the coast in the early 19th century.

European farming methods were first introduced by missionaries in the Bay of Islands where most of the land had already been cleared for Maori gardens. Some later settlers had the daunting task of clearing their own properties, but after the felling and burning of vast tracts of forest agriculture proliferated throughout the region

These industries radically changed the landscape and created the foundation of our present economy. Some of their results may be regrettable but they also form a significant aspect of Northland's historical legacy.