Learn about European colonisation of Northland in the centuries after Abel Tasman first sighted the northern coast in 1643.

European voyagers seeking a fabulous southern continent 'rediscovered' New Zealand in the 17th and 18th centuries. The first, Abel Tasman, merely sighted the northern coast in 1643 and left a brief description of Manawa Tawhi, the Three Kings Islands. In the following century several explorers visited Northland for longer periods and the journals and drawings from their expeditions, especially those of Cook and du Fresne, provide what are inevitably culturally biased but still invaluable accounts of Maori settlements and customs before they were affected by European contact.

But this was not a great southern continent, there was no apparent wealth of gold, little obvious industrial potential apart from flax and timber, and the inhabitants were decidedly warlike. 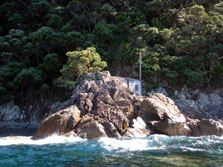 Consequently there was no immediate influx of prospectors and settlers. However, in the early 19th century the Bay of Islands, situated close to the southern whaling grounds, became the major whaling port of the Pacific where ships were re-fitted and were provisioned through trade with local Maori, some of whom sailed as crewmen on the whaling ships.

Missionaries also arrived in the first few decades of the century. Initially the Anglican Church Mission Society set up mission stations in the Bay of Islands, then the Wesleyans moved into the Hokianga and Whangaroa Harbours and finally French Catholic missions were established in the Hokianga, the Bay of Islands and later at Whangaroa. They were slow to make converts but there was no parental objection to Maori children attending and being fed at the mission schools and when their printing presses began to produce books there was an insatiable Maori demand for literature. Inevitably, if gradually, the indigenous ethos was eroded and covered by a plaster of Christian doctrine - not a stable foundation for the immediate future.

Material change was faster and even more devastating. There were some advantages in the introduction of European crops, domesticated animals and metal tools but these were outweighed by introduced diseases and firearms. Influenza, measles and venereal disease took their toll while Ngapuhi warriors descended on their traditional enemies with the formidable advantage of muskets - the Maori population was decimated. 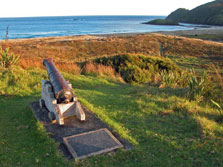 As Maori numbers decreased, European settlement was expanding. The original riff-raff of runaway sailors and ex-convicts, who occupied Kororareka in the Bay of Islands, were joined by tradesmen, merchants and land speculators and by the late 1830s it had become a thriving township. For a brief period at least a quarter of the Europeans in New Zealand lived around the Bay.

A British Resident was installed and an American Consul appointed but they had little power to enforce law and order and eventually, though without great enthusiasm, the British Government determined to negotiate with Maori people for recognition of the Queen's authority "over the whole or any part of those islands which they may be willing to place under Her Majesty's dominion". In February 1840 the Treaty of Waitangi was signed by some 50 chiefs on the lawn of the British Residency, now known as the Treaty House.

But many had strong misgivings over the annexation of their country and discontent grew as customs duties reduced trade at the Bay. In 1844 Hone Heke cut down the flagstaff at Kororareka as a symbolic rejection of British sovereignty and the fighting that followed this gesture culminated in a series of battles between British troops and factions of Ngapuhi led by Hone Heke and Te Ruki Kawiti. Maori strategy showed ingenious adaptations of traditional methods to musket warfare and the British suffered several defeats, but finally the Ngapuhi nationalists were overcome at Kawiti's pa, Ruapekapeka. This battle site remains as an outstanding example of Maori military ingenuity.

The fighting was over, the seat of Government was transferred from Okiato (old Russell) to Auckland and after the momentous events that had taken place the region settled down to a quieter existence based mainly on timber extraction, gum-digging, ship-building, and farming.