The eradication of spartina in the mud flats that make up the Invercargill estuary was thought to be an impossible task. Through dogged determination and hard work we are close to achieving this goal. 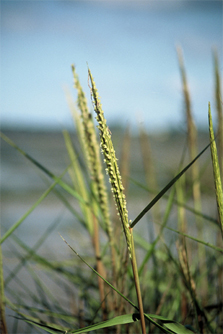 Spartina, known as cordgrass, is native to Europe and was introduced to New Zealand as an estuarine stabiliser plant.

Two species of spartina were planted within the New River Estuary and there is now hybridisation between the two species:

The New River Estuary is a large tidal lagoon type estuary which drains eight catchments, including Oreti River, the third largest in Southland.

The planting of spartina has been detrimental to estuary health with:

The impact of spartina

Spartina was planted in the New River Estuary between 1930 and 1955 to reclaim what was perceived as waste land. Through planting and natural spread, spartina infested 800 ha of the estuary. Biodiversity ranger Graham Miller has led the control programme since it started. His innovative methods have been the key driver and success of this programme. These methods included:

Nowadays, the argo transports staff, and control is undertaken by knapsack using 'Gallant’, a herbicide specific to grasses.

Control and surveillance also occurs in all other estuaries in Southland.

Results have been impressive – from the once vast hectares of spartina, last season there were less than 150 individual plants.

However the team continue their spartina surveillance and control and each season they march through areas of eel grass and rushes to find those last elusive plants.