June 2015
This report describes the results from the aerial survey in 2014/15 to investigate the population size and trend of white-capped albatross at the Auckland Islands. 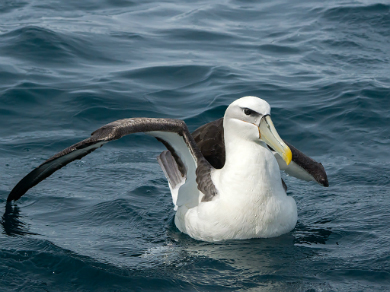 White-capped albatrosses Thalassarche steadi are endemic to New Zealand, breeding on Disappointment Island, Adams Island and Auckland Island in the Auckland Island group, and Bollons Island (50-100 pairs) in the Antipodes Island Group (Gales, 1998). Previous population estimates that we have developed (Baker et al. 2014) show that most (95%) of the global population breeds on Disappointment Island, an area where access is restricted to maintain environmental values at the site.

Between 2006/07 and 2014/15 (hereinafter 2006 and 2014, respectively) we undertook repeated population censuses of the white-capped albatrosses breeding in the Auckland Islands using aerial photography. These population censuses were carried out in either December or January each year to estimate population size and track population trends. Our measure of population size was ‘Annual breeding pairs’, defined as any pair of albatrosses that lays an egg in the breeding season of interest. All other birds in colonies were assessed as ‘Loafers’, defined as birds present in a colony but which do not appear to be associated with an active nest at the time of observation.

Ground counts undertaken by Thompson et al. (2015) in January 2015, a few days before the 2014 aerial counts were undertaken, showed that of 1,127 birds sitting on nests, 909 (81%) were incubating eggs and 218 birds (19%) were sitting on empty nests. These data can be compared with ground counts of nests taken earlier in the breeding season (December) in 2008 that showed that 93.5% contained eggs and only 6.5% were empty. Aerial counts undertaken earlier in the breeding season are likely to provide a more accurate estimate of annual breeding pairs as nest failures occur progressively throughout the breeding season once egg laying has been completed. Ground-truthing data assessing the proportion of birds sitting on empty nests will not reliably provide a correction factor relevant to determining annual breeding pairs, as a bird sitting on an empty nest may have laid and subsequently lost its egg, may be yet to lay, or simply be a non-breeding loafer.

Count data over nine years show strong inter-annual fluctuations, a characteristic we have observed for many other seabird species. This variability would encompass counting error, the presence of non-breeding birds during counts, environmental stochasticity and other unknown variables that are not easily quantified. Trend analysis of nine years of counts using regression splines showed no clear evidence for systematic increase or decline over the nine years of the study. Given this we do not have sufficient evidence to reject the null hypothesis of no systematic trend in the total population. The trend should be considered to be uncertain; however, the null hypothesis of a stable population remains tenable and is probably a reasonable interpretation.