July 2016
This paper reports on the development of a novel design for a bird baffler for use on deepwater trawlers. 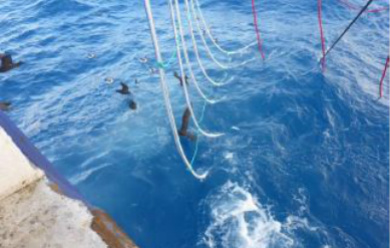 In New Zealand, bird bafflers have been deployed from trawlers for around a decade, including as one of three mandatory seabird scaring devices aimed at reducing seabird interactions with trawl warps. In this project, we report on Conservation Services Programme project MIT2013-05, which involved developing a novel design for a bird baffler for use on deepwater trawlers > 28 m in overall length.

Three baffler designs were produced, all based on a combination of booms with droppers hanging to the sea surface and a stern curtain designed to enclose the warp area.

The Prototype I design was for a baffler with booms that could be deployed at adjustable angles, to optimise the coverage of trawl warps under different fishing conditions. Booms were stored across the vessel stern when not in use. Challenges with engineering this design to ensure adequate boom strength led to a redesign to strengthen the boom structure.

Prototype II therefore retained the concept of rotating the booms out into position and storing them across the vessel stern when not in use. Boom strength was increased by adopting a design analogous to that used for paravane booms, which are regularly deployed from trawl vessels. However, engineers could not identify a mechanism to effectively secure the booms in anything other than mild weather conditions.

The final baffler design (Prototype III) comprised a boom tower with a fold-down boom that locks into place at 90o to the tower for deployment. One tower and boom unit is affixed at each stern quarter. A metal plate secures each tower and boom unit to the vessel and the boom extends 8.4 m at a fixed 130o angle to the vessel stern. When not in use, the boom can be stored upright beside its support tower. For testing, boom droppers were constructed using conventional construction materials on one side of the vessel stern (i.e. rope with plastic pipe) and rope inside 45-mm diameter plastic hose droppers on the other side.

The performance of the Prototype III baffler was documented during three trips to sea. Government fisheries observers assessing baffler performance at sea considered that the Prototype III baffler was the most effective they had seen on trawlers in New Zealand waters. The hose dropper system worked better than the more conventional rope and pipe dropper construction. However, the area inside the baffler booms and curtain was by no means impervious to seabirds, and both albatross and petrel species were seen to enter. Further, some trawl warp always protruded from the enclosed area.

Minor improvements were made to the baffler following at-sea testing to improve its performance. Overall, this baffler cost approximately $40,000 to make and install, and the vessel required strengthening in order to support it. While preliminary testing of the Prototype III baffler showed it performed well at sea, its significant cost is likely to make other mitigation options preferable in the longer term.