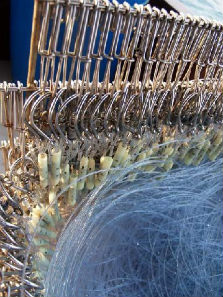 Seabird bycatch has been reported from surface-longline fisheries for more than two decades. Characteristics of surface-longline gear that exacerbate the likelihood of seabird captures include its light weight, the long length of lines and snoods to which hooks are attached, and the attractiveness of baits to seabirds. Despite a well-researched suite of measures that have been shown to be effective in reducing seabird bycatch on this fishing gear, ongoing bycatch occurs in New Zealand and internationally. This continuing bycatch may be due to the inconsistent or insufficient implementation of existing measures, or the incompatibility of existing measures with gear types or fishing operations. In particular, safety issues associated with line-weighting — one effective method proven to reduce seabird bycatch risk — appears to have reduced uptake of this measure in New Zealand.

Globally, there is ongoing research into new measures to reduce seabird bycatch in surface-longline fisheries. Improved safety is a key component of the development of some of these measures. In this project, we trialled four devices intended to reduce the risk of seabird bycatch in surface-longline fisheries. These devices were (i) safe leads, weighing 60 g and comprising two lead pellets secured with O-rings around a rubber core, through which the monofilament snood passes, (ii) luminous plastic-covered “lumo” leads, weighing 40 g (iii) lumo leads weighing 60 g, respectively comprising a partly or fully lead-filled tapered plastic cylinder which attaches to longline snoods via a screw cap, and (iv) hook pods, which completely enclose longline hooks during setting until the fishing depth is reached. Safe leads and lumo leads are designed to move on snoods when monofilament stretches, and tension is suddenly released. This situation can arise during longline hauling, and the movement of the weights is designed to reduce the potentially dangerous recoil resulting in a weight flying back towards the vessel. Hook pods also move on the snood, though less readily than the other weight types.

In 2013, we trialled safe leads and 60-g lumo leads on one vessel each. In 2014, we tested 40-g lumo leads and hook pods on a third vessel. All vessels operated in New Zealand’s surface-longline fishery, and targeted tunas and swordfish. The deployments of safe leads and 60-g lumo leads were overseen by government fisheries observers. A dedicated technician implemented the 40-g lumo lead and hook pod trials. Trials of safe leads and lumo leads followed a broadly balanced design with half the snoods
on longlines being weighted with the devices being tested, and the other half comprising “normal” fishing gear, configured and deployed as per the skipper’s typical operations. Across the experimental and normal snoods, weighted swivels and lightsticks were deployed in accordance with the skipper’s preference. Time-depth recorders (TDRs) were deployed on snoods to measure sink rate, generally at three approximately equallyspaced locations in a longline basket.

For hook pods, the smaller number of pods available led to an approach of deploying approximately 50 pods on a longline. TDRs were also deployed on hook pods (and snoods in these sets not carrying pods) to document sink rates.

For all devices tested, snood characteristics (e.g., lightstick attachment) and fish catch were documented at hauling, and TDRs were retrieved for downloading. The location of experimental weights on snoods was also documented. Finally, the operational characteristics of the experimental weights were documented, including feedback from skippers and crew. For the trips during which 40-g lumo leads were deployed, fish catch was compared using permutation testing. The effects of weighted swivels at the clip and lightsticks were also explored using a model-based approach.

Over seven trips on the three vessels, weighting methods were examined on 6–21 sets. Sets comprised 600–1400 hooks. Across the weighting methods trialled, 41–130 TDR records were retrieved. Although not the focus of the project, captures of three albatross (Thalassarche spp.) and two New Zealand fur seal (Arctocephalus forsteri) were recorded.

Fish catch was dominated by tunas, swordfish (Xiphias gladius) and blue shark (Prionace glauca). For tunas and swordfish, catch rates on snoods carrying 40-g lumo leads did not differ from catch on normal snoods. However, the catch rate of sharks on snoods carrying lumo leads was significantly lower than for normal gear. Shark catch was also reduced on snoods with weighted swivels at the clip, whereas snoods with weighted swivels and lightsticks showed reduced tuna catch.

The crews of all vessels readily adapted to the addition of the experimental weights to the fishing gear. One incidence of potentially dangerous recoil involved a safe lead, and there were 12 incidents involving the recoil of lumo leads. However, cases where the experimental weights had slid under tension were also recorded. Recommendations for improving the design of lumo leads and hook pods include refining the shape of the devices and how they attach to the monofilament snoods. While the experimental weights tested were designed to reduce safety risks associated with weighting surface longline snoods, they do not eliminate them. Caution and vigilance is still required to minimise ongoing safety risks, especially when hauling longline gear.