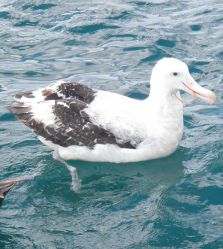 Data gathered over the 2012/13 summer allowed survival for 2011 and 2012 to be calculated, although results for 2012 should be treated with caution until a further year’s data has been collected. Male survival was very low (85.2%) in 2012, with female survival also low at 89.5%. Adult survivorship has been lower than average since 2004, with extremely low female survivorship in 2006 and 2008, the cause of a major sex imbalance in the breeding population over these years.

The number of birds breeding for the first time in the Study Area has been very variable, but dropped significantly in 2005 and 2006 and has been slowly increasing since then.

Nesting success in 2012 was 43%, with 49 chicks fledging. This was similar to the 2011 season, and an improvement on the 24%-25% nesting success rate of 2006-2009. However, it remains much lower than the norm of about 60% prior to the collapse of the population in 2005, and the number of chicks produced remains small because of the smaller numbers of pairs attempting to breed.

This report was commissioned by the Department of Conservation, Project POP2012-07

By Graeme Elliott and Kath Walker