Tongariro Forest is one of eight security sites for whio, and has the highest numbers of pairs protected and the highest density of birds than anywhere else in the country.

Tongariro Forest is a 20,000 ha forest in the central North Island located to the northwest of Mount Ruapehu. It's bordered by three main rivers (Whakapapa, Whanganui and Mangatepopo), all of which hold high numbers of whio.

Tongariro Forest is one of eights sites identified as a priority for whio management.

Predation by stoats is the number one threat to whio. Other threats include rats, cats, dogs and ferrets.

Whio are protected by predator trapping along the rivers, as well as aerial 1080 operations every three years.

Two whio rangers are employed to check the traps and undertake monitoring throughout the breeding season (September to February). We protect 35 km of river with three traplines running parallel – one along the river and two flanking the river approximately 1 km apart.

We are now also micro-chipping the birds as a permanent way of marking them, as the colour bands can wear through and fall off after a few years in the harsh river environment. 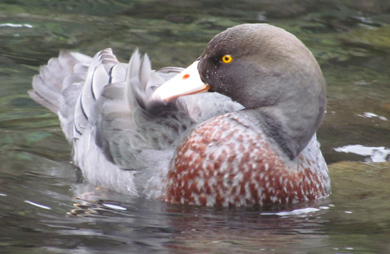 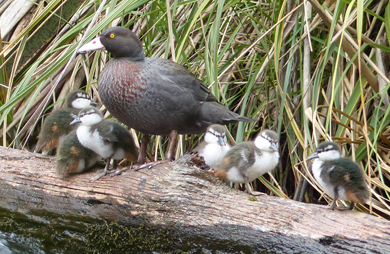 Adult whio and her brood of ducklings
Image: B Smith

Since the project began, the number of whio pairs has jumped from 30 to 109. This is more than double the original goal of growing the population to 50 pairs secured. In one recent season alone, 185 fledglings were observed during surveys which is a record 1.7 fledgling per pair.

Tongariro Forest is a popular destination for many recreational groups, including mountain bikers, kayakers, trampers and hunters. You can help by making sure to 'check, clean and dry' your gear to prevent didymo from reaching the pristine rivers in the forest, as well as only taking dogs which have passed an avian aversion course into the forest.

If you see any whio, report them either to the local DOC office or by entering sightings directly in to iNaturalist NZ – Mātaki Taiao. There is a specific project called Whio Forever where we collate observations made nationally. It's also a great place to see where whio can be found around the country!

You can also help by reporting any concerns to the Tongariro office.

The trust was set up between Genesis Energy, DOC and Forest & Bird during the resource consent renewal process for the Tongariro Power Development. This brought about a significant recovery of the whio population, which has led to Genesis sponsoring a national whio recovery programme.

Whio Forever has for more information on whio protection around the country.

Bring your mountain bike or 4WD to Tongariro Forest, or come to simply observe the multitude of threatened species residing in the 'forest of the future'.