It was during a trip to the deep Southern Ocean, which includes the Antipodes Islands, that a partnership between Gareth Morgan (of the Morgan Foundation New Zealand) and DOC was hatched.

Gareth is a philanthropist and avid conservationist and his trip to the ice and subantarctic islands cemented his desire to ‘make a difference’ to these outstanding World Heritage site outposts.

The foundation has been instrumental in bringing awareness of the pest ‘mouse’ problem on the main Antipodes Islands to the New Zealand public and it set a challenge – to raise funds for an eradication project that would remove mice from the Antipodes Islands. 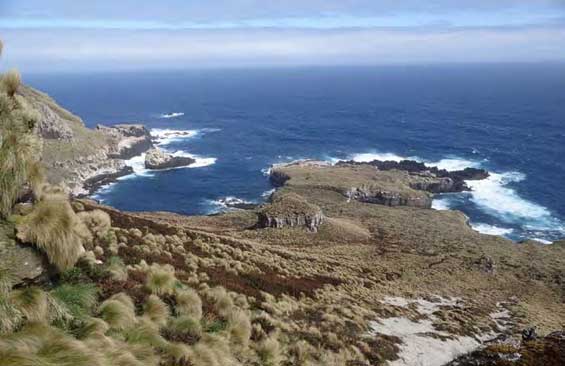 The ‘Million Dollar Mouse’ campaign was subsequently launched. The Morgan Foundation matched public contributions dollar for dollar and now with the cash in the bank, including a significant contribution from the Department of Conservation who will carry out the work, the project is well and truly underway. See Million Dollar Mouse for more details.

Mice are the only introduced species on the islands and despite their small size they have a huge impact on the islands’ birds, eating eggs and chicks as well as consuming huge numbers of insects and seeds.

Stephen Horn, our project manager, travelled to the Antipodes in February to check out the islands, assess the site and start work.

It is thought that in early January unprecedented rainfall in the area generated huge slips on the island,affecting seabird colonies, knocking out the weather station and also sending the DOC hut sliding down the hill. Fortunately the historic Castaway Hut was not affected. Stephen’s visit established that a repair was viable and with some car jacks, chainsaws and Kiwi ingenuity, the team successfully protected the hut from further winter water damage.

A mid-winter trip was made in August to re-build the hut, taking a mix of burly builders and all the building materials along with savvy scientists, volunteers and DOC staff on board the yacht Evohe.

Landing and unloading in the stormy winter conditions was not only a chilly undertaking but a logistical test of wits and will to get all materials and humans safely ashore. Unfortunately the large swells made landing treacherous and several extra days were spent on board before materials were finally able to be taken ashore and transported to the site. Minimal building was able to be undertaken due to time constraints, and vegetation monitoring was also curtailed.

A longer month-long trip in November is now planned to complete the hut re-build and the science trials.

Seamless protection between land and sea

The three new marine reserves established in February 2014 cover an area of 435,000 ha of ocean surrounding the Antipodes, Bounty and Campbell islands. These reserves are in addition to the 484,000 ha of reserve established in 2003 that surrounds the Auckland Islands. This takes the total area of Subantarctic Reserves to nearly 1,000,000 ha.

Marine reserves create the seamless protection between land and sea needed here, as there are very few terrestrial animals on the islands that don’t depend on the sea for their survival. Relationships between the surrounding seas and marine and land-based species are complex and affect all forms of life. The intention of the reserves is to maintain healthy, sustainable food stores for the marine and land species that depend upon them and to ensure in perpetuity that these diverse ecological communities are protected. The opportunities for research and recreational activities within the reserves are welcomed as we seek to gain a better understanding of this fascinating area.

However, the rules state that no fishing, discharging, removal of any natural item, mining or petroleum exploration can occur within the reserve boundaries. 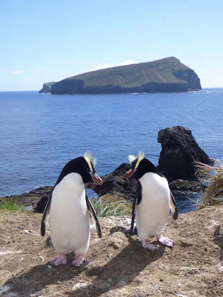 Unfavourable weather conditions during the February 2014 trip to Antipodes Island meant that only a brief survey of the penguin colonies around the coast was possible. The eastern rockhopper (Eudyptes filholi) and erect-crested (Eudyptes sclateri) penguins are already in documented decline, possibly due to conditions at sea.

The major slips in January appear to have wiped out large numbers of nest sites, many of which would have been filled with chicks at the time. Unfortunately, as a result of this weather event, very poor chick recruitment is anticipated last year. Scientists plan to conduct a 5-yearly census of the colonies when they travel to the islands in November, to gain a more accurate estimate of breeding pair numbers and assess the damage to the colonies.

We will keep you updated early next year with results from this survey.

Finally, just a reminder to all visitors that all the islands are smoke-free environments.

We look forward to hearing from you with comments and suggestions for anything you would like to see or read about.