Autumn on the islands

What a busy summer we’ve had and there’s more lined up!

The LINZ hydrographic survey (see Subantarctic Scribe Summer 2014) has recently been completed on time and due to favourable weather conditions, withsome extensions to the area covered. This hard work will ensure improved safety in navigating the eastern coast of the Auckland Islands. The hydrographic team spotted several southern right whales/tohorā during their survey, adding another highlight to their work in the far south.

The Governor-General, Lt Gen The Rt Hon Sir Jerry Mateparae, has recently travelled to the Auckland Islands. His Excellency was hosted by Brent Beaven, the Conservation Services Manager for Southern Islands on Enderby Island. Also present were representatives from the New Zealand Antarctic Research Institute, Sir Peter BlakeTrust, NIWA and the University of Otago.

The weather was fantastic which allowed for a comprehensive exploration of the proposed Blake Station site at Smiths Harbour, a tour of Enderby Island to view the southern royal albatross/toroa, yellow-eyed penguin/hoiho, New Zealand sea lion/whakahao and megaherbs.

Also squeezed into the tight schedule was a visit to the historic Ranui Coast watchers’base and lookout, Hardwicke settlement site and an overflight of the islands. This visit generated plenty of discussion around the inter-connectedness of natura lheritage, history and science and provided an opportunity to open communication channels between these agencies to work together to achieve more for the benefit of all.

For those who have ventured to the Antipodes Islands, you will appreciate how far away the mainland is at 860 km south-east of New Zealand. The generally inclement weather and landform prevents easy access onto the island.

The project management team has, despite these challenges, made steady progress with the monitoring, hut rebuild, and captive breeding trials and were very pleased to confirm in October 2014 that Bollons Island is free from mice.

Securing a shipping and helicopter company, pilots, and the specialised equipment capable of undertaking the eradication within the original timeframes has been extremely challenging. As these elements are crucial to the success of the project it has been decided to delay the eradication until winter 2016.

The proposed trip for May 2015 to undertake further preparation work, with the New Zealand Navy in support, has also been delayed until early next year as the HMNZS Canterbury has been deployed to Vanuatu to assist in the wake of Cyclone Pam. We will keep you up dated as this project unfolds.

In late March the New Zealand Navy ventured down to the subantarctics for 2 weeks, offering their continued support for the Department’s work programme. 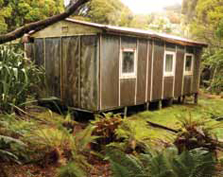 This year the HMNZS Wellington transported a multi-tasked team with a range of roles and tasks to be completed. The first team was the Ranui historic restoration team, comprising DOC staff and volunteers. They were to ‘weather proof’ and re-pile the base building at Ranui and to replace windows that have been re-created to exacting details using the same materials as the originals for both Ranui and Tagua lookouts.

A memorial ceremony to pay respects to those men who served as part of the ‘Cape Expedition’ and were deployed to the subs during the WWII will take place at the base during this trip.

Another team of four were to investigate cat behaviour, do some baseline bird monitoring and mouse population studies. They were also investigating different trapping methods and lures for feral pigs. This is to build on and improve our current knowledge of these pests and their behaviours.

The third team was based on the ship and were to complete general track and historical maintenance around the Auckland Islands.

As this season has concluded we would like to thank all operators for taking part in our visitor survey – we have had a good number of surveys returned and the results are currently being analysed. We will forward the results as they come to hand.

The Southern Islands team has had a change of staff recently as Di Morris has left to return to Rakiura/Stewart Island. We welcome Katie Russell as her replacement.

If you have any queries and wish to contact Katie please email krussell@doc.govt.nz.