Stoat footprints were identified by a ranger undertaking routine servicing of the island’s biosecurity sentry stations on 20 May. Prints were located on the north west coast of the motu/island at Administration Bay, near the Motutapu Outdoor Education Camp. This alert comes after a stoat was confirmed on Motukorea /Browns Island a few weeks back. 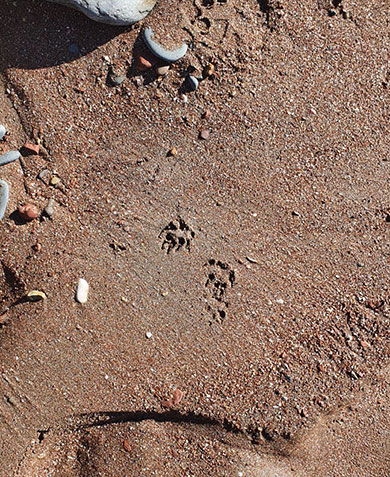 DOC’s Operations Manager, Katharine Lane says, “DOC and Ngāi Tai ki Tāmaki had been working through the lockdown on Motutapu to maintain island biosecurity and it is disappointing to find evidence of a threat to the pest free status of the island. A full incursion response is underway with a network of traps baited with eggs and rabbit meat set to catch the stoat.”

Ngāi Tai ki Tāmaki leader Billy Brown says, “The protection and enhancement of the mauri of Motutapu is of critical importance to Ngāi Tai ki Tāmaki and we are working closely with DOC to ensure the island is pest-free.”

How the stoat got here is speculation but this is a timely reminder, as we come out of COVID-19 lockdown, for people going back out on the water, to ensure that all boats, yachts and kayaks are pest free when heading into the Hauraki Gulf, to maintain the pest-free status of or islands.“

DOC works in partnership with iwi, Auckland Council and community groups to protect the 47 pest-free islands in the Hauraki Gulf Marine Park. Motutapu has been pest free since 2011 and provides a safe haven for threatened and at-risk native wildlife including kiwi, takahē, tūturuatu/shoreplover, tīeke/saddleback, kākāriki/red-crowned parakeet, korimako/bellbird, and native skinks.

At 178 million years old pest-free Motutapu is one of the oldest land masses in the Hauraki Gulf. The island was intensively settled by Māori, it hosted massive Victorian picnic parties, and was a base during WWll. Now, following the world's largest island pest eradication programme, it's a fine place to see native birds including the rare and beautiful tieke.

Visiting pest free islands, or islands that are becoming pest-free, make sure you check your gear before you leave the mainland.

When you arrive on a pest-free island, you may be met by rangers to recheck your gear. Dogs are not allowed on island reserves in the Bay of Islands, Hauraki Gulf, and Marlborough Sounds islands. Check specific rules for a place before you visit.

Stoats are members of the mustelid family. Weasels and ferrets are also mustelids. All three species were introduced to New Zealand as early as 1879 to control rabbits that were destroying sheep pasture. From very early on, stoats have had a devastating effect on New Zealand’s unique birdlife.

The effect of stoat predation on the survival of many of New Zealand’s bird species cannot be underestimated. They are voracious and relentless hunters, described as having only two reasons for living – to eat and to reproduce.

Stoats are 'public enemy number one' for New Zealand birds.