DOC is ready for this summer's breeding season for New Zealand's most endangered bird, the New Zealand fairy tern/tara iti.

Seven fairy tern/tara iti rangers joined the wider DOC fairy tern/tara iti team last month and will be based at nesting sites in Waipū and Mangawhai in Northland and Pakiri and Papakanui, in the Auckland region, October – February.  Breeding sites are monitored during daylight hours seven days a week during the season by DOC rangers and trained volunteers. 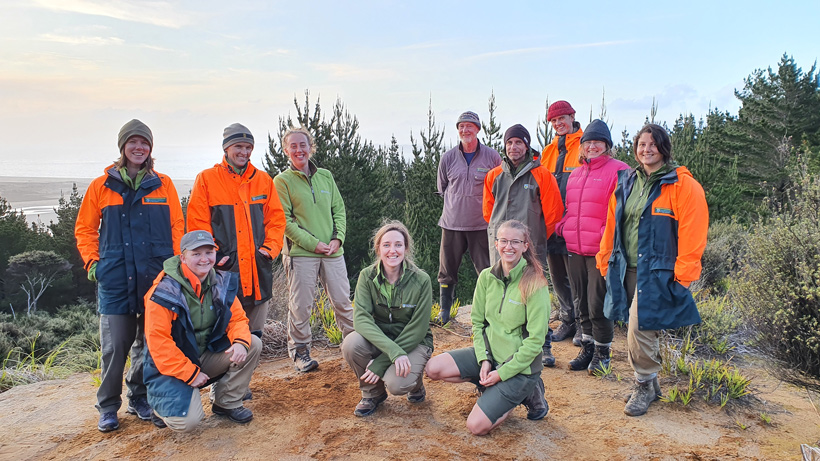 "Our tara iti/fairy tern rangers, along with trained volunteers, are essential to the survival of the species. They keep an eye on the adult birds during breeding and nesting, and monitor chicks. Along with doing compliance and public advocacy, they also keep records of feeding and other behavior to look at long-term trends in relation to things like fish stocks and weather impacts," says Ayla Wiles, DOC Biodiversity Ranger.

"Last season was fairly successful in terms of chick numbers for us, with seven chicks fledged, the most in recent years. We've also had recent good news with some of the chicks from last season recently spotted back at the breeding sites, including the chick we supplementary fed last year. That bird is now making regular appearances at Waipū and looking very well fed. He seems to have been accepted into the tara iti community and is doing quite well for himself. We don't expect him to breed for at least a couple of years but are just happy to see him make it through his first winter."

All going well, DOC expects the first tara iti eggs to be laid early summer and chicks to hatch around Christmas/New Year.

Tara iti are critically endangered. The total population of this species is fewer than 40 birds.

Tara iti used to nest on beaches right round the North Island coast and on the east coast of the South Island. Introduced predators (feral cats, rats, stoats, ferrets and weasels), habitat loss and human disturbance have brought them to the brink of extinction.

To protect tara iti at their nesting sites, follow these simple rules.

Tara iti nest on beaches during summer between October and February. They create a nest by scraping a small hollow in the sand. This means their eggs and chicks are very vulnerable. DOC and volunteers fence off the four nesting areas and erect signs asking the public not to enter the sites.

Since the recovery programme began, the number of tara iti has risen from a low of just three recorded breeding pairs in 1984 to nine breeding pairs producing seven chicks in the last season.