Community-led conservation efforts achieved spectacular results with an 89% decrease in rats detected at one of the Bay of Plenty’s most important ecological locations.

Community-led conservation efforts achieved spectacular results last winter with an 89% decrease in rats detected at Mokaihaha, one of the Bay of Plenty's most important ecological locations.

Mokaihaha Kōkako Trust recorded rat prints in 37% of its tracking tunnels before the 2019 pest control operation but in only 4% of the tunnels afterwards. 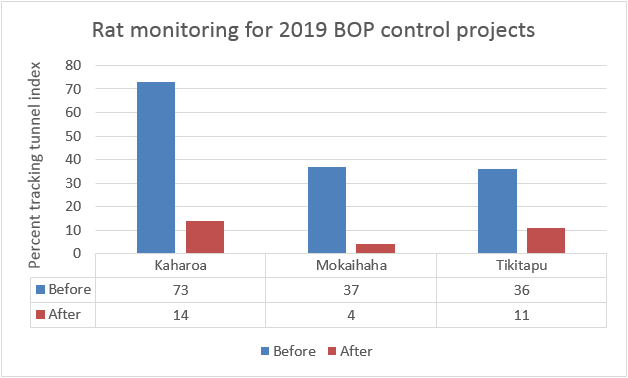 The predator control programmes were implemented to protect kōkako and native mistletoe however other species benefiting from these pest management programmes include North Island kaka, long and short-tailed bats, kererū and riflemen among others

All three operations used bait stations which were stocked with toxin by either volunteers or contractors depending on the site.

Bex Newland, DOC Senior Biodiversity Ranger, says to measure the success of a predator control operation, possum or rat monitoring (or a combination of both) is completed before and after a control operation. This is done using tracking tunnels in which rats leave footprints and calculating how many tunnels as a percentage rats have visited.

For possums, the tracking tunnels are replaced with live capture traps.

Monitoring using these methods for the 2019 predator control operation showed an 89% reduction in rats in the Mokaihaha Ecological Area after poisoning compared to their pre-poisoning level.

Bex Newland says the results are very positive and reflect the value of the predator control operation and DOC's collaboration with its stakeholders to protect native species.

"The tireless work our community groups put into pest control around the district year after year is invaluable. We are seeing local kōkako populations flourish and ecosystems are getting protection that wouldn't be possible without the work these groups do."

"Our volunteers turned out in all kinds of weather to put in their effort, and this project would not have been possible without their diligence and commitment," she says.

The ongoing ecosystem protection including the protection of kōkako, forest birds, mistletoe and a wide range of palatable tree species is largely due to the continuation of these community-led predator control programmes.