DOC is hoping floating platforms will help to keep the chicks of a central Christchurch colony of critically endangered tarāpuka/black-billed gulls from drowning this breeding season.

A three hundred-strong colony of the world’s rarest gulls has been nesting on the site of the former PWC building since October, but many gulls have chosen to build their nests on precarious narrow beams surrounded by water.

DOC Mahaanui Community Ranger Vanessa Mander says they decided to intervene as passers-by had reported seeing freshly hatched chicks falling into the water where they become stranded, unable to fly or climb out.

“When tarāpuka eggs hatch, the chicks creche together to keep warm and protect each other. This isn’t ideal behaviour when your home is a one-metre wide concrete beam, so we’ve temporarily installed four floating platforms to act as life rafts if the chicks fall into the water,” she says.

DOC has been monitoring the colony’s progress since the tarāpuka first began nesting on the site last month. DOC rangers foresaw the risk of the chicks potentially drowning and began working with Carter Group on a plan to build and install the floating rafts. 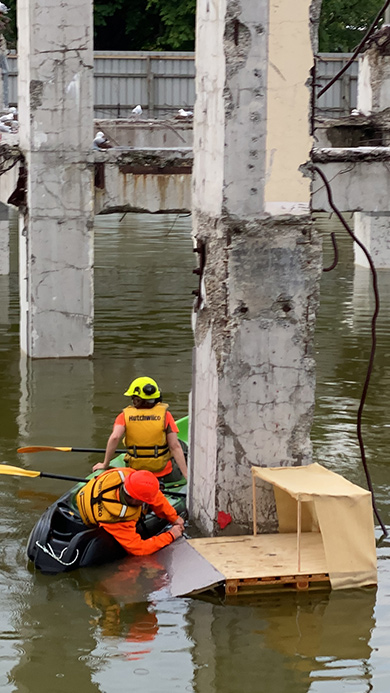 The four life rafts, each measuring 1.2m x 1.2m are made from wooden pallets and 20-litre containers. DOC rangers built the rafts and tested them at Lake Roto Kohatu before installing them below the colony where they will remain in place until the chicks fledge in February.

To minimise the disturbance to the nesting gulls, a small team kayaked across the flooded basement yesterday evening, securing rafts to four concrete pillars beneath the colony.

“While the fence and the water surrounding the colony has helped to prevent predators such as cats and rats from eating eggs or attacking the chicks, this waterlogged building site with little room for a growing colony has proven to be far from ideal. The significantly larger karoro/black-backed gulls have also started circling and picking off vulnerable chicks.”

DOC now believes the colony may have relocated from the Avon Heathcote Estuary/Ihutai as the birds that generally reside there over spring did not arrive this year.

“Although the gulls have chosen this privately-owned central city site for the current breeding season, they’re extremely adaptable and will likely move to a different site next year. We’re working with Environment Canterbury to protect and enhance the gull’s natural habitat on braided river gravel islands throughout Canterbury and a large colony has recently formed in the middle of the Hurunui River,” she says.

Landowner Philip Carter is supporting DOC’s initiative to install the floating platforms and has provided DOC with access to the building site.

“We’re working closely with DOC to ensure the success of this current breeding season. Plans to build on the former PWC site have been in place for some time and we will be making an announcement about these plans in the next month,” says Philip Carter.

Now the platforms are in place, DOC will continue to monitor the site to ensure the colony has a successful breeding season before the chicks become independent and the birds abandon their nests.

The black-billed gull has the unfortunate status of being the most threatened gull species in the world. Stronghold populations have rapidly declined by as much as 80%, resulting in its threat status being upgraded from Nationally Endangered to Nationally Critical in 2013.

Disturbing protected birds and destroying nests is an offence under the Wildlife Act 1953 and can result in imprisonment and/or a fine of up to $100,000.

Breeding on a riverbed is a risky business. Many eggs and chicks do not survive. Riverbed birds have adapted to cope with floods and are able to re-nest if eggs or chicks are lost.